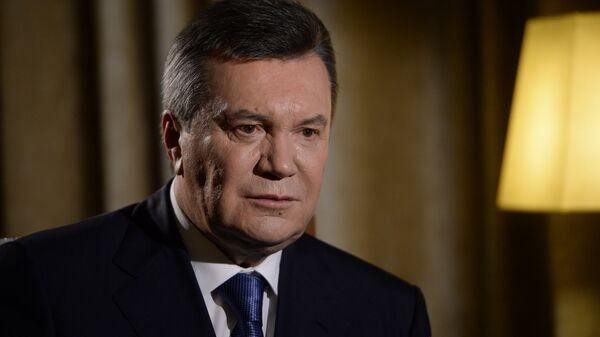 MOSCOW (Sputnik) — Ex-President of Ukraine Viktor Yanukovych calls for a referendum on the status of the southeast Ukrainian region known as Donbass if Kiev does not comply with a set of ceasefire agreements.

"In the event of current Ukrainian authorities failing to observe the Minsk agreements, it is needed to initiate a referendum on the status of Donbass," Yanukovych wrote in a letter to world leaders obtained by Sputnik.

He offered to include the leaders of the Donetsk and Lugansk People's Republics in the reconciliation format comprising Russia, France, Germany and Ukraine.

Yanukovych also calls on world leaders to "initiate the creation of a special commission of the Council of Europe to monitor the investigation of crimes committed on the Maidan."

Why Kiev's Shelling Raids on Donbass Coincide With Poroshenko's Foreign Tours
The Donbass conflict erupted in April 2014 as a local counter-reaction to the West-sponsored Maidan coup in Kiev that had toppled legitimate President Viktor Yanukovych in February. Residents of the Donetsk and Lugansk regions held independence referendums and proclaimed the People's Republics of Donetsk and Lugansk. Kiev has since been conducting a military operation, encountering stiff local resistance.