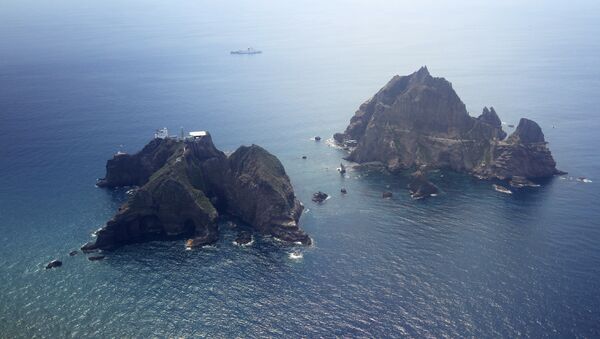 © AP Photo / Korea Pool
Subscribe
South Korea will lodge an official protest with Japanese diplomats after Tokyo sent senior officials to the islands of Dokdo, promulgating the claim that Japan owns the archipelago.

The islands are referred to as ‘Dokdo’ by South Korea, and ‘Takeshima’ by Japan.

"We demand Japan immediately stop its useless attempt over Dokdo," the South Korean Foreign Ministry said in a statement. Japan’s claim is "unjustified," the statement noted, adding that this is not the first time that Tokyo has promoted “the so-called Dokdo Day held by Shimane Prefecture." Dokdo is South Korean territory, "historically, geographically, and by international law,” and Japan, therefore, must show an attitude of seeing historical facts in a humble way," according to the statement.

A 2015 article in National Interest pointed out that "while the South China Sea and Senkaku Island disputes are all the rage these days, South Korea and Japan’s conflict could be equally consequential."

US President Donald Trump said during a joint news conference with Japanese Prime Minister Shinzo Abe, "I just want everyone to understand and fully know that the United States of America stands behind Japan, its great ally, 100 percent." It is not clear whether the Trump administration backs Japan’s claim to Takeshima, however.

According to the Japan Times, parliamentarian Shunsuke Mutai’s Wednesday visit to the disputed islands marks the fifth time since 2013 that the federal government of Japan has sent a parliamentary vice Cabinet Office minister to the ceremonies for Takeshima Day.

Meanwhile, Japan launched its own diplomatic tirade against South Korea. On Wednesday, Japan filed a protest with South Korea regarding a video posted online using the name "East Sea" to describe the Sea of Japan, a Japanese government spokesman told Japan Times. "The Sea of Japan is established internationally as the only name [for the sea]. Japan cannot accept the contents of this video," Chief Cabinet Secretary Yoshihide Suga told reporters on Wednesday.

The Japanese education minister also moved to alter the educational curriculum in Japan so that elementary and junior high school students learn, for the first time, that the Takeshima islets are 'inherent' parts of Japanese territory, the Japan Times reported. The islets measure less than a quarter of one square kilometer, and were produced by volcanic eruptions some 4.5 million years ago.

Following the installation of a statue in front of the Japanese Consulate in South Korea to commemorate the abduction and placement of Korean women in Japanese military brothels before and during World War II, the Japanese ambassador to South Korea was sent home to Japan. The ambassador has yet to return, the Japan Times notes.

000000
Popular comments
And that's it. The rest will be settled by the US.