© AP Photo / Manuel Balce Ceneta
Subscribe
George Soros' alleged interference in Eastern European affairs has recently become the focus of a number of US congressmen. Members of both the House and Senate are probing the US billionaire's activities in the small Balkan country of Macedonia.

Storm clouds are gathering on George Soros' horizon: US lawmakers have recently turned the spotlight on the left-wing billionaire activist's alleged interference in European politics.

The political crisis in Macedonia began in 2015 after the opposition accused the ruling conservative party of intercepting the phone conversations of some 20,000 people. As a result, Gruevski resigned and parliament was dissolved.

The Macedonians elected a new parliament in snap elections in December 2016, after several cancellations. The VMRO-DPMNE party and the opposition party SDSM won 51 and 49 seats, respectively. However, tensions continue to simmer in the country. 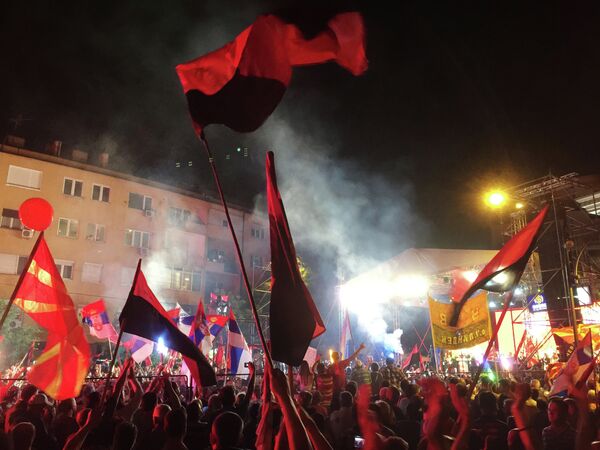 In his January interview with the Macedonian media outlet Republika.mk Gruevski stressed that "if it were not George Soros behind it with all the millions he pours in Macedonia, the entire network of NGOs, media, politicians, inside and out… it would not be that difficult, and the economy would be stronger, we would have had more new jobs."

Perhaps, Gruevski's concerns would have not reached US lawmakers' ears if the VMRO-DPMNE were not regarded as "a strongly pro-American" party.

Time to 'Drain the Swamp': Will Soros Find Himself Behind Bars?
In his February op-ed for the Daily Signal Mike Gonzalez, former Bush administration official and senior fellow at The Heritage Foundation, assumed that the Soros-led Open Society Foundations together with the US Ambassador to Macedonia were allegedly "trying to shut out the strongly pro-American, pro-capitalist VMRO-DPMNE coalition, which actually won the most votes in the Dec. 11 elections."

Gonzalez pointed out that the controversy had prompted members of both the House and Senate to send their letters to US Ambassador in Macedonia Jess Baily, Barack Obama's appointee, on January 17.

"This is a critical time in Macedonia as their elected officials negotiate a new government in the aftermath of the parliamentary elections finally concluded this past December. Unfortunately, I have received credible reports that, over the past few years, the US Mission to Macedonia has actively intervened in the party politics of Macedonia, as well as the shaping of its media environment and civil society, often favoring groups of one political persuasion over another," Senator Mike Lee wrote in his letter to Ambassador Baily.

Senator Lee asked Baily whether the US Mission to Macedonia selected the Open Society Foundations as the major implementer in USAID projects in Macedonia.

Adam Show of Fox News reported, citing the State Department's reply to Lee that the Mission has worked "to advance US interests." He noted that from 2002 to the present USAID had provided three grants to Soros' Foundation Open Society — Macedonia (FOSM).

Referring to USAID's official website the journalist pointed out that between 2012 and 2016, FOSM had received $5 million from USAID for "The Civil Society Project," which "aims to empower Macedonian citizens to hold government accountable."

The US Embassy in Macedonia tweeted on February 14 that it responded to Senator's Lee letter.

In response to press inquiries… pic.twitter.com/J7fKl9smja

However, it seems that Baily's response has not satisfied the US lawmakers.

On Sunday Macedonian English-language media outlet Independent.mk reported that US Congressman and Arizona Republican Trent Franks has joined the Congress and Senate in criticizing Soros and Baily for undermining the US policy in the region.

"The challenge that we have seen is some questionable funding that the US Mission has made to organizations associated with George Soros which are really antithesis of many things America believes. And we've tried to get support from the State Department and USAID to try to get to the bottom of why this funding is occurring in ways that are antithetical to the best interests of Macedonia and that undermine the US policy in the world," Franks said in an interview with the Macedonian National Television (MRTV).

US' Bill on Info War Against Russia Has Soros' Fingerprints All Over It
Franks underscored that although the Obama administration "was very comfortable with this funding," the White House's new occupants are likely to reconsider their predecessors' policies.

It is not the first time George Soros has meddled in US foreign affairs, Show noted citing one of the John Podesta emails released by WikiLeaks. In this email dated January 24, 2011 Soros urged then Secretary Hillary Clinton to take action in Albania over opposition demonstrations in Tirana.

"Bring the full weight of the international community to bear on Prime Minister Berisha and opposition leader Edi Rama to forestall further public demonstrations and to tone down public pronouncements… My foundation in Tirana is monitoring the situation closely and can provide independent analysis of the crisis," Soros wrote to Clinton.

It appears that not only US congressmen but also ordinary US civilians have become fed up with George Soros' controversial activities.

Over 16,000 people have recently signed a petition asking US President Donald Trump to deprive George Soros of citizenship and expel him from the US, accusing him of spreading post-modern values and carrying out social engineering experiments both in the US and abroad.