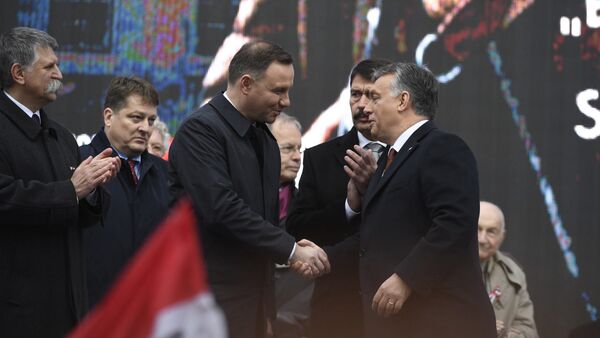 Poland and Hungary have joined forces to counter European Commission officials, laying the groundwork for a new political force that could destroy the European Union from within, according to the Russian online newspaper Vzglyad.

Poland's Law and Justice Pledge No Support for 'Icon of Evil' Tusk Reelection
Two countries, Poland and Hungary, have added their voices to the angry chorus of European countries which are dissatisfied with Brussels, increasing the likelihood that "united Europe" will disintegrate, the Russian online newspaper Vzglyad reported. The two countries have joined efforts in order to counter the perceived intrusiveness of European Commission officials.

Budapest's support is essential to Warsaw, as Poland could otherwise run the risk of being hit by sanctions. Vzglyad sees the partnership as a new political force that could destroy the EU from within.

The European Union is concerned about reforms introduced by Poland's ruling Law and Justice (PiS) party, which include limiting the judicial freedom of the Constitutional Court, along with extending control over state media and banning abortions.

In January 2016, the European Commission opened an inquiry into the changes, and regularly assessed progress in its dialogue with Poland on the issue.

In February 2017, the Polish government dismissed demands that it implement judiciary reforms deemed essential by the European Commission to uphold the rule of law.

Poland, at the moment, risks being stripped of its EU voting rights. That decision, however, would require unanimous consent from all 28 member states.

This makes it unlikely: the Hungarian government has announced that it would not support sanctions against Warsaw, according to Vzglyad.

'Existential Crisis' in Europe to Result in 'Other Countries Leaving EU'
This is not the first time that Poland and Hungary, which are ruled by Eurosceptic politicians, have defied Brussels, Vzglyad said.   In particular, Hungarian Prime Minister Viktor Orban held a national referendum in the fall of 2016 about whether Budapest should stick to the EU decisions on quotas for refugees.

As for the current situation, Vzglyad went on to say, it deserves mentioning, and not only due to the fact that Poland has once again decided to defy the EU's leadership by signaling its readiness to pursue an independent domestic policy.

"The uniqueness of the current situation is that Eurosceptic forces have begun to show a tendency to join efforts. They are doing so in order not just to jointly appear at rallies or support the elections but to push for their own interests within the EU," Vzglyad pointed out.

PiS leader Andrzej Duda and Orban have repeatedly demonstrated common political views and now they have signaled their readiness to work together in a move that confirmed Brussels ' worst fears, according to the Vzglyad.

By helping Warsaw avoid sanctions over non-compliance with the EU's requirements, Budapest knows full well that it may also face the same situation, given that Hungary's current policy of greater independence from Europe has enraged "united Europe."

"So it is possible to speak of the emergence of a new Eurosceptic union between Poland and Hungary, which is ready to internally oppose the EU's leadership centered in Berlin," Vzglyad pointed out.

If Orban and Duda continue bilateral cooperation, Brussels will have problems putting pressure on Warsaw and Budapest, which may prompt support for Eurosceptic political forces in other EU countries.

Eurosceptic Parties Join Forces at Koblenz Summit Calling for 'Freedom From EU'
The current situation in the European Union can be called the most serious institutional crisis of the organization in its history. According to Vzglyad, who cited the Eurozone's financial woes, post-Brexit uncertainty and differences among EU members could lead to a protracted political and economic crisis and seriously  destabilize "united Europe."

If Brussels fails to find the key to resolving these problems, stop Eurosceptics and conduct reforms, the future of the European project will be in jeopardy, Vzglyad concluded.