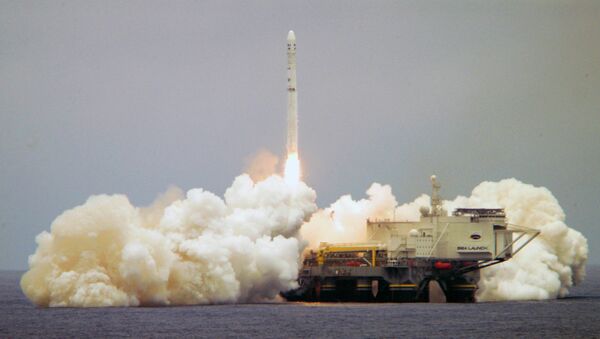 MOSCOW (Sputnik) — In January, Russian media reported that the preliminary settlement agreement was reached between RSC Energia and Boeing. Within the framework of the accord the $330-million debt of the Russian corporation, which emerged due to the bankruptcy of the Sea Launch consortium before the project had been sold to the S7 Group would be payed through RSC Energia's participation in joint projects.

"A final signing of documents that could result in a 'settlement agreement' is expected soon. The S7 Group is involved directly neither in preparation nor in the implementation of the 'settlement agreement' and would not make any payments. These are relations between the RSC Energia and Boeing," Vladimir Solntsev said.

Science & Tech
Russia's RSC Energia to Carry Out Tourist Flights Around Moon by 2021-2022
Sea Launch was formed in 1995 as a consortium of four companies from Norway, Russia, Ukraine and the United States, and was managed by Boeing. The project aimed to use a floating launch site to place rockets on the equator, which gives the rocket additional speed on lift-off thanks to centripetal force caused by Earth's rotation.

RSC Energia and Boeing have been cooperating in a number of programs connected with manned space launches, for example in the issues related to the International Space Station (ISS).

Energia will develop a new carrier rocket for the Sea Launch.

"I think that in the next four years we will be able to propose a new rocket to the S7 Group. The schedule of the construction has already been created," Solntsev said.

He added that the corporation would use the RD-171M engine for the first stage of the carrier rocket and RD-0124 for its second stage.