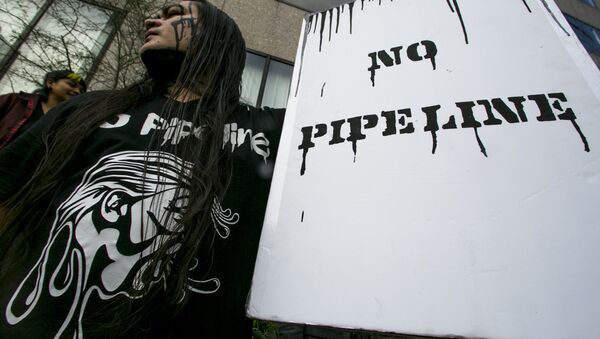 © AP Photo / Damian Dovarganes
Subscribe
International
India
Africa
Police in the US state of North Dakota began arresting protesters opposing the construction of the Dakota Access pipeline who refuse to leave their protest camp after the deadline to vacate the area expired on Wednesday afternoon, US media reported.

The US Army Corps of Engineers and North Dakota Governor Doug Burgum gave protesters until 2 p.m. Central Time on Wednesday to vacate the camp.

On February 8, the Corps of Engineers granted easement needed to immediately resume work on the final phase of the pipeline, which was in limbo pending an environmental impact statement since December.

President Donald Trump signed on January 24 an executive order to advance construction of the Dakota Access pipeline without the environmental review.

The nearly 1,200-mile pipeline is intended to transport domestically produced light crude oil from North Dakota through the states of South Dakota and Iowa into Illinois.