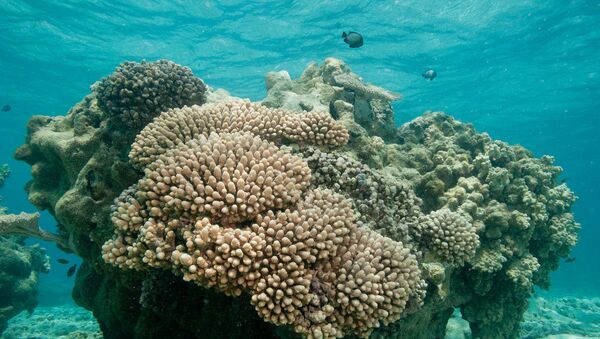 For the fourth year in a row, catastrophic bleaching has killed large swathes of Australia’s Great Barrier Reef. The bleaching, caused by sea temperature increases, has spread to new areas previously unaffected by the phenomenon.

Coral bleaching was first identified as being a widespread threat in 2014, following that season's El Niño meteorological pattern in the Pacific Ocean. The weather phenomenon, caused by a band of warmer water that affects atmospheric pressure changes, occurs every few years, but the 2014 event was particularly intense.

The El Niño ended and was replaced by its opposite, the ocean-cooling La Niña, but oceanologists said that it was too little, too late. The reef bleaching will now continue over the next several months.

Despite the name, coral bleaching has nothing to do with bleach. Coral reefs are home to a type of algae called zooxanthellae. These single-cell life forms have a symbiotic relationship with the coral, consuming the reef's carbon dioxide and nitrous waste products.

Under stressful conditions (such as high temperatures) the coral ejects the zooxanthellae and waits for the stress to pass before cultivating a new form of algae. The zooxanthellae gives coral its coloration, and so a reef without the algae appears white, as though it has been bleached.

According to Dr. Gareth Williams, with Bangor University's School of Ocean Sciences, it takes about 10 years for bleached coral to recover, unless it dies, because it has nothing to consume its waste. Williams observed that, by the 2040s, most of Earth's reefs will be bleached.

"Unprecedented and prolonged ocean warming triggered a global coral bleaching event that started in 2014 and may extend well into 2017. The length of the event means corals in some parts of the world had no time to recover in 2014 or 2015 prior to experiencing bleaching the following year,"  wrote a team of marine biologists that included Williams in a paper published in Nature.

Apart from splendid coloration and scientific interest, coral reefs also provide protection for coastlines (hence the word "barrier" in the name of the Great Barrier Reef) as well as habitats and food sources for an enormous amount of marine life.