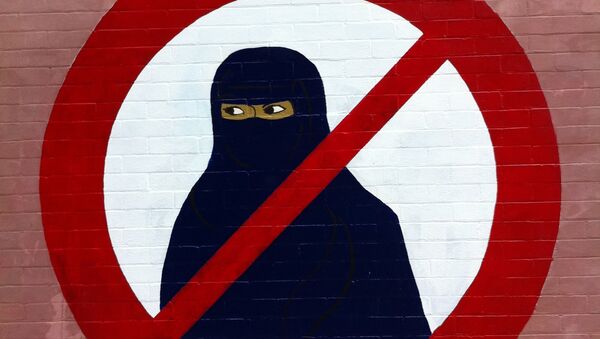 The German state of Bavaria has adopted a draft bill banning facial coverings in public places, the ruling CSU party announced on Tuesday.

The Interior Minister also announced a draft anti-terror law which will allow the police to monitor terror suspects with electronic ankle tags.

"In the future, we will know exactly where such people are and limit their range of movement if necessary. If an offender damages the ankle tag, he can also be taken into custody. This is another measure to better tackle German and foreign threats."

Bavarian Police Warn Fake Story About Rape by Migrant Making Rounds in Germany
Bavaria's governing Christian Social Union (CSU) party holds 101 of 180 seats in the Bavarian state parliament, so the draft laws are likely to be approved. The party announced the burka proposal on Facebook, accompanied by a picture of an offending burka.

"Bavaria is taking action! Today, the cabinet set in motion a law prohibiting face coverings in Bavaria. Face-coverings are forbidden in areas of public service, colleges, schools, kindergartens, areas of general security and for activities such as elections," the CSU party wrote on its Facebook page.

Facebook users had a mixed reaction to the proposal. Some were in agreement, some called for a complete ban in all public places and others accused the CSU of borrowing a populist policy from the anti-immigrant Alternative for Germany (AfD) party.

A commentary by Katja Auer in the local Suddeutsche Zeitung newspaper linked the CSU announcement with forthcoming federal elections in Germany this fall, and portrayed the idea as opportunistic.

"Such a prohibition is not necessary in Bavaria. If fully-veiled woman appear in large numbers in the Free State of Bavaria, it is usually in the summer on the Maximilianstrass, where they spend a lot of money on expensive clothes. Very few of them will want to become a university teacher in a niqab teaching students, or apply for a job as an educator," Auer wrote.