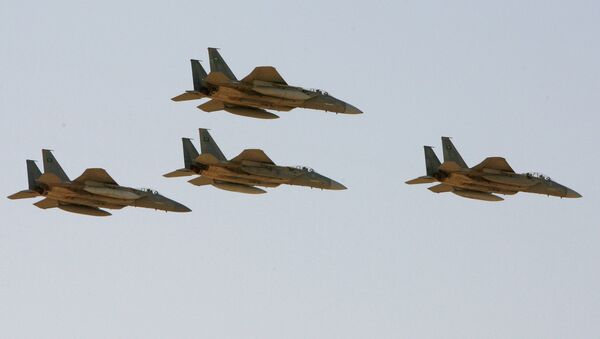 © AP Photo / Hassan Ammar, File
Subscribe
International
India
Africa
Any attempts on the part of Washington and its Persian Gulf allies to drive a wedge between Moscow and Tehran in the Middle East will prove futile, Iranian political analyst Reza Moghaddasi told Sputnik. Moghaddasi underscored that the Russo-Iranian relationship has gone beyond a mere political alliance.

Why Trump is Unlikely to 'Win Anything' by Targeting Both Daesh and Iran
Washington's attempts to create an anti-Iran Arab alliance in the Middle East won't undermine the Russo-Iranian strategic partnership, Iranian political analyst and former director of Mehr News Agency Reza Moghaddasi emphasized in his interview with Sputnik Persian.

It was reported last week that the Trump administration has allegedly considered the idea of forming an Israel-friendly anti-Iran Arab defense pact on the basis of the Saudi-led coalition intervening in Yemen.

Citing Middle Eastern officials, the Wall Street Journal reported on February 15 that the alliance would include such countries as Saudi Arabia, the United Arab Emirates, Egypt and Jordan.

I don't know Putin, have no deals in Russia, and the haters are going crazy — yet Obama can make a deal with Iran, #1 in terror, no problem!

​In response, the Kremlin signaled that it does not agree with the US approach.

"We do not agree with this approach," Russian presidential spokesman Dmitry Peskov told reporters, "We have cooperated on a range of issues [with Iran]. We value our trade and economic ties which, we hope, will further develop."

Speaking to the broadcaster Al Mayadeen on Sunday, Iranian Parliament Chair Ali Larijani highlighted that "Iran strives for a strategic partnership with Russia in the [Middle East]."

According to Moghaddasi, this move on the part of Tehran is justified.

"The strategic alliance between Iran and Russia, which is forming as a result of close cooperation, is not just a response to the US challenge of creating an anti-Iranian military alliance with Saudi Arabia, the UAE, Egypt, Jordan and possibly other countries. The Russo-Iranian strategic relationship goes beyond that," Moghaddasi told Sputnik.

US Coalition Envoy Considers Russia, Iran, Turkey 'Main Influencers' in Syria
The political analyst pointed out that the Syrian crisis had accelerated the Russo-Iranian rapprochement, which subsequently has evolved into a real strategic alliance.

"Although the Syrian issue has long been a centerpiece of this interaction [between Iran and Russia], there are also a number of other issues which remain a high priority for the two countries. These are economic and energy issues as well as military development cooperation. Therefore, this relationship should be viewed as something more than just a political alliance," Moghaddasi underscored.

To illustrate his point, the Iranian analyst referred to the "brilliant victory" won by the Syrian Arab Army (SAA), backed by Russian and Iranian military forces, in the Syrian city of Aleppo.

"Naturally enough, when two countries become strategic allies in the military field, this cooperation could be expanded into other spheres," he noted.

Israeli Defense Minister Claims Iran 'Biggest Threat' in Mideast, Not Zionism
Moghaddasi drew attention to the fact that "many countries" keep trying to drive a wedge between Tehran and Moscow.

He stressed that "a lot of petrodollars" have already been spent by Arab monarchies to undermine the Russo-Iranian alliance. However, their attempts have proved futile, the Iranian analyst stressed.

"I think that Russia realizes that it plays a positive role in resolving Middle Eastern conflicts and continues to move forward," Moghaddasi said.

In this context, US attempts to form a sort of anti-Iranian military alliance in the Middle East are unlikely to ruin the Russo-Iranian partnership, he stressed.

"Today we see lots of failed attempts to create a unipolar world. The balance of power is being restored. New powers and alliances have emerged on the global arena. The strength of Iran, Russia and our allies is increasing," the Iranian political analyst noted.

"There is nothing surprising about it. This triangle will de facto control the situation in the Middle East. The United States has been present in the region for a long time and has no intention of withdrawing. This is why this triangle is a serious issue for the US," Kazakov explained in his interview with Sputnik in early February.

Meanwhile, Iran, Russia and Turkey continue to secure the ceasefire in Syria which was established on December 30, 2016.

The countries brokered the Astana talks on Syria in January 2017, bringing together the Syrian government and armed opposition for the first time since the beginning of the conflict. The talks resulted in an agreement to implement a trilateral mechanism to monitor the Syrian truce.