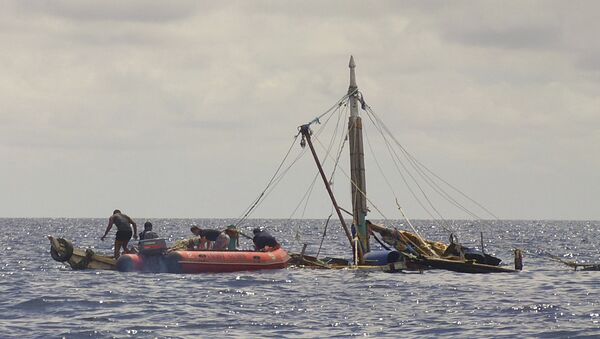 Pirates in southern Philippines waters killed one crew member and abducted seven more when they attacked the Vietnamese-flagged MV Giang Hai near Baguan Island in the Sulu Sea.

Seventeen of the 25-person crew were rescued by the Philippines Coast Guard, which then pursued the attackers, Reuters reports. Those abducted were Indonesian, Malaysian, Vietnamese, Filipinos, Dutch, German and Japanese nationals.

Baguan Island is in the island province of Tawi-Tawi, near the stronghold of the small but violent Abu Sayyaf militant group, which is known for piracy and kidnapping, as well as murdering its captives if ransom demands are not met. Abu Sayyaf is thought to have been holding 27 hostages before the most recent attack.

The southern Philippines is becoming known for such attacks, and maritime officials have warned that the area is in danger of becoming a "Somalia-type" zone if lawlessness in its waters cannot be curbed.

But diverting around the deep-water Sibutu Passage between Malaysia's Sabah state and the Sulu Sea of the southern Philippines, the fastest route between Australia and East Asia's big manufacturers, would cost a pretty penny and cause transport disruptions on an international scale, as many thousands of ships use it every year.

"If shipowners will skirt that area just to avoid kidnap at sea activities by these terrorists, for sure, it will have an additional cost," Philippine Coast Guard chief Commodore Joel Garcia told AFP.

"It's not just the concern of the Philippines or Indonesia and Malaysia, but of the international shipping community."

Philippines Defence Secretary Delfin Lorenzana said earlier this month that the country planned to ask both China and the US to help defend the passage, including holding joint exercises in its waters.

The US military has been deployed for more than a decade in the southern Philippines to contain Abu Sayyaf.