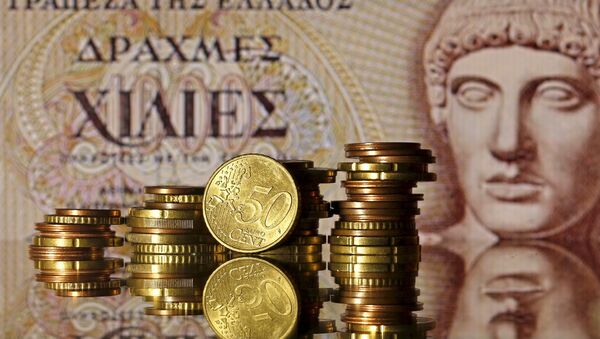 Speaking at a recent European Parliament session, German MEP Hans-Olaf Henkel called for a "double decision" on Greece, namely, a massive debt relief for Athens and the withdrawal of Greece from the Eurozone.

Berlin Says It 'Has Done a Lot to Help Greece Economically Get on Its Feet'
A high unemployment rate and vague economic prospects should prod Greece to leave the Eurozone as soon as possible in order to become more competitive again, German MEP Hans-Olaf Henkel said during a European Parliament session.

He called for taking the so-called "double decision" on Greece, which stipulates the country's withdrawal from the Eurozone and a substantial debt relief in exchange.

"The euro is too strong for Greece and has led to declining economic performance and the destruction of jobs [in the country]. Let's not delude ourselves, the money we gave Greece we will not see again. Let us free Greece from the burden of being part of the euro, because it has only harmed the country," Henkel said.

Commenting on Henkel's remarks, influential Turkish economics expert Korkut Boratav told Sputnik Turkey that the lack of a national currency in Greece made it more vulnerable to the negative impact of the economic crisis.

Greece is in an unsustainable limbo…I cannot see Italy remaining in the Eurozone for very long. @yanisvaroufakis on @AJUpFront

Boratav stressed that although Greece earlier had mechanisms to grapple with the economic meltdown and devaluation of the national currency, the crisis rode roughshod over the country due to the fact that Greece using the euro.

"Shifting to the euro [drove] Greece, as well as Portugal, Spain, Ireland and even Italy into the crisis. They proved to be in the grip of austerity due to their inability to use mechanisms to protect their economies from national currency devaluation," he said.

Greece Urges IMF to Return 'to Reality' on Bailout Ahead of Eurogroup Meeting
Boratav referred to the results of a referendum held in July 2015, when the conditions of the Troika of Greece's international lenders were rejected by the country's population.

Although they specifically envisaged Greece abandoning the euro, German Prime Minister Tsipras did not dare to take this step, according to Boratav.

"Despite the fact that the EU representatives stressed the need for Greece to withdraw from the Eurozone if the Greeks voted against the Troika's proposal, and that the use of a parallel currency was on the agenda, Athens did not take a single step in this direction after the referendum," Boratav said.

Abandoning the Eurozone is a move which could help Greece get its feet back on the ground once again, he noted.

"Greece can stabilize the situation by scrapping the euro. Being in the EU and the Eurozone is not a vital condition for the existence of the country.However, it is important to establish the functioning of anti-crisis mechanisms to use the national currency. Greece has failed to take this step. Features of Greek society and the ruling class' orientation prevented Athens from taking such a step," he said.

Meanwhile, German Finance Minister Wolfgang Schaeuble said Monday ahead of the eurozone finance chiefs' meeting that Greece's lenders appear to have reached a common position on the contentious Greek bailout.

Greek Bailout Deal on Track as Eurozone Faces Election Realities
Greece is struggling to repay billions of dollars in debt to its international creditors, including the IMF, the European Central Bank (ECB) and some EU member states.

Since 2010, the government has implemented severe austerity measures to tackle the debt, including tax increases, spending cuts and various reforms.

Despite these efforts, Greece has been the recipient of three EU bailout packages, of which Germany is the largest contributor.