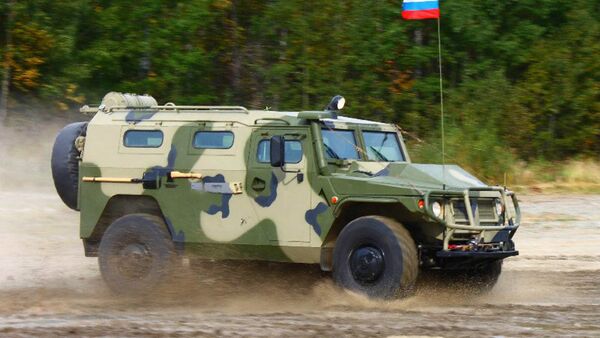 ABU DHABI (Sputnik) – The vehicle was first introduced at the Army-2016 military fair in Russia’s Kubinka near Moscow in September last year.

“At the expo in Kubinka, we realized that the car interested potential customers — we received support from the management of some Russian security forces and continued to work on it [the unmanned Tigr]. I think that this year we will get some funding and will be able to make all the improvements and begin testing the new version of the Tigr," Krasovitskiy said, speaking on the sidelines of the 2017 International Defense Exhibition and Conference (IDEX).

At the same time, the company’s CEO added that a police modification of the car has been in demand in Uruguay. A five-door 10-seat version was specifically developed for the country, he added.

"In the autumn of 2016 we delivered a new batch of Tigr cars to Uruguay — as soon as they were delivered to the customer, they were immediately shown at a local parade of internal troops,” Krasovitsky said, adding that the Latin American country is now in possession of about 10 Tigr cars.

According to Krasovitsky, Slovakia is also interested in buying a new batch of police-modification Tigrs.

“We delivered one vehicle to Slovakia in 2016, and they want more,” the CEO said.

Russia to Complete BTR-80 Delivery Contract to Bangladesh in 2017
Krasovitsky recalled that police Tigrs had been bought by 10 foreign countries, and Russia is currently in contact with several more on potential contracts.

The 13th biennial IDEX kicked off on Sunday in the United Arab Emirates' capital of Abu Dhabi and will last through Thursday. The exhibition is the only one in the Middle East to include equipment for land, sea and air troops, traditionally visited by senior government and military officials from around the world.