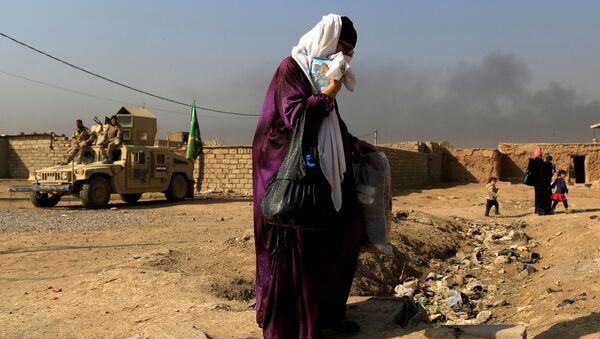 Daesh fighters are detaining, ill-treating, torturing, and forcibly marrying Sunni Arab women and girls in areas under their control in Iraq - the first cases identified of such practices being inflicted against Sunni Arab women.

Human Rights Watch (HRW) researchers interviewed a number of women who fled the Daesh-controlled town of Hawija, to the northern city of Kirkuk. While HRW and the United Nations have previously documented extensive sexual abuses carried out by Daesh against Yazidi women, including the execution of 250 girls who refused to be sex slaves, this is the first time such abuses have been detected among the Sunni community.

One woman described being forced to marry her cousin, who then raped her; another had her home destroyed by militants after her husband deserted Daesh, and likewise forced to marry a fighter.

In April 2016, Daesh captured a large group of women who were attempting to escape Hawija and held them for months in an abandoned house, where they were raped in front of their children on a daily basis.

A woman, Aisha, recounted how her family was caught by Daesh trying to flee. They shot her son, and beat the female members of the group with rifle butts. The women were then lashed 65 times each, with more lashes added if they winced at the punishment. They were held for a fortnight, and only released after paying US$2,000.

Experts from four international organizations working with survivors of sexual assault in Iraq told HRW it is difficult to assess the prevalence of Daesh' gender-based violence against women who have fled territory under their control. They said victims and their families remain silent to avoid stigmatization and harm to their reputations.

The women interviewed are all patients at the Kirkuk Center, where a staff of 12 provides psychological and behavioral counseling to women and children. The site has almost fallen victim to bombing attacks by the US and its allies on more than one occasion.

Dr. Abd al-Karim Kalyfa, manager at the center, said it was treating 30 patients, 15 of them children, suffering from trauma related to their experiences living under Daesh. In 2016, he said, his center treated about 400 patients who had come from Daesh-held territory. Daesh fighters raped several of his current patients.

HRW also lamented the inability of The Kurdistan Regional Government and other international humanitarian groups to provide survivors of violence with post-rape care and psychosocial support.

"Victims of gender-based violence suffer the consequences of their abuse long after they have managed to escape. Their care and rehabilitation requires a multifaceted response, with authorities providing the needed medical and psychosocial support and working to stamp out stigma around sexual violence within the wider community. We hope the international community will do all they can to give this group of victims the support they need," said Lama Fakih, deputy Middle East director at Human Rights Watch.