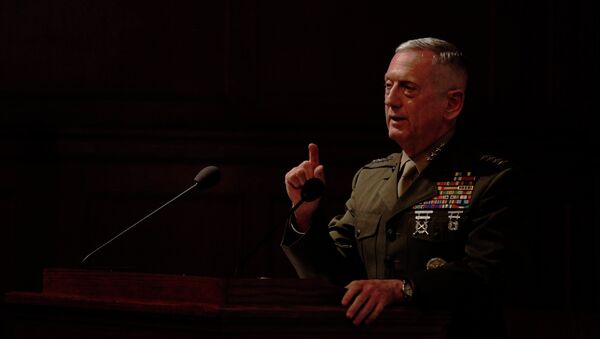 © AP Photo / Matt Dunham
Subscribe
International
India
Africa
Pentagon's chief James "Mad Dog" Mattis said that the United States would talk to Russia from a "position of strength." According to experts, his statement is ambiguous and indicates differences between the Trump administration and the warmongering wing of the Washington establishment.

Mattis on Shoigu's Remark: 'NATO Has Always Stood for Military Strength'
United States Defense Secretary James Mattis declined to comment on the statement by his Russian counterpart Sergei Shoigu that attempts to build dialogue with Russia from a position of strength is counterproductive.

Mattis underscored that NATO has always stood for military power and protection of democratic states.

On Wednesday, during a NATO defense ministerial meeting, Mattis underscored that Washington is committed to restoring cooperation with Moscow but will negotiate from a "position of strength."

US Should Respect Russia as Major Power - Ex-Homeland Security Chief
In response, Russian Defense Ministry Sergei Shoigu said: "We are ready to restore cooperation with the Pentagon. However attempts to build dialogue from a position of strength with regard to Russia are futile."

According to Sergei Sudakov, a political analyst and a professor at the Academy of Military Sciences, Mattis’ remark on Russia should be considered in more than one dimension.

"A military solution is always the simplest solution. But it is more than meets the eye. In fact, Mattis said that the deterrence policy towards Russia should be continued. By saying that that, he sent a signal to Trump that US military spending should be increased. Read between the lines: the goal of having tensions with Russia is to receive money to make the country [the US] stronger," Sudakov told Radio Sputnik.

At the same time, according to the analyst, the US is unlikely to resort to real actions since Washington understands the outcome.

"A position of strength means that one side can impose its will on the other side and the other side accepts it. The current situation is that a nuclear power wants to impose its terms on another nuclear power. I guess that Mattis was a bit overreacting. But that was only rhetoric aimed to increase Pentagon’s budget. It is impossible to talk to a nuclear power from a position of strength. Negotiations and partnership ties are needed. I think Mattis knows that," Sudakov pointed out.

NATO 'Remains Fundamental Bedrock for US, Transatlantic Community' - Mattis
According to Grigoriy Tischenko, a senior analyst at the Russian Institute for Strategic Studies, Mattis’ words followed the logic of the current situation around the White House.

"His ambiguous statement was a tribute to keeping tensions between Washington and Moscow. It added to the recent events in the White House, including the resignation of national security advisor Michael Flynn and Press Secretary Sean Spicer’s statement on Crime. All of them are like links in a chain. The hawks are increasing pressure on Trump and he and his team have to make such statement, in a bid to ease the tensions," Tischenko said in an interview with Radio Sputnik.