Japan Taking Over US Car Market Despite TPP Failure 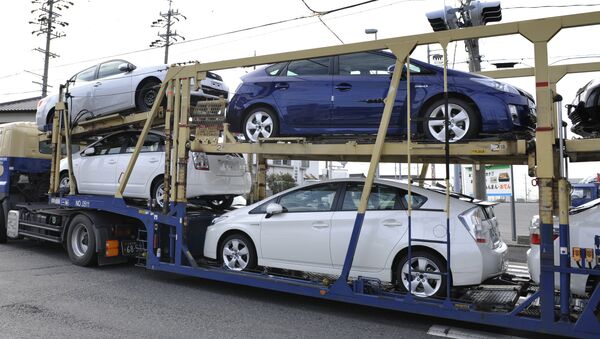 © AFP 2023 / Kazuhiro NOGI
Subscribe
International
India
Africa
Even though the United States had a trade deficit of almost $7 billion with Japan in 2016, the number of Japanese cars that reached the US market last year kept going up. Unfazed by the 2.5 percent import tax, Japanese cars remain top sellers in America.

In an interview with Sputnik Japan, Yoshio Tsukuda of the Tsukuda Mobility Research Institute said that America is importing top-class made-in-Japan cars and hybrid cars with high VAT and they are selling well, with the comparatively low gasoline prices in the US as one of the reasons.

In 1981 the United States and Japan, both hit by skyrocketing oil prices, reached a voluntary restraint agreement limiting the volume of Japanese automobile exports to the US, which lasted 13 years.

Japan Could Discuss Bilateral Free Trade Area With US Instead of TPP - Abe
“Honda and other Japanese carmakers had nothing to do but to start making and selling their cars on US territory,” Tsukuda noted, adding that Japanese auto companies had built a number of plants in the US creating about 1.5 million new jobs there.

Still, President Donald Trump recently complained about the slow sales of US-made cars in what he described as a “protectionist” Japanese market.

In 2016, Japan imported a mere 518 million dollars’ worth of American cars while simultaneously exporting to the US cars and trucks worth over $39.6 billion – over 75 times as much.

While Japan was increasing its import of foreign cars, the Japanese preferred German cars over American ones because of the US automakers’ flawed marketing policy, Yelena Leontyeva, a senior expert at the Institute of World Economy and International Relations in Moscow, told Sputnik.

“Last year Ford rolled up their operations in Japan and GM fails to offer right hand drive cars to Japanese motorists. The Japanese market is the most competition-friendly around, but the Americans are still moving out focusing their attention on China,” she noted.

Commenting on the car trade between Japan and the US, Leontyeva said that Japanese cars are selling even better in the US than American-made ones.

“Japanese carmakers are successfully competing with Detroit and this is the result of their previous effort on the American market.”

Japanese carmakers view the US as their primary source of dollar revenue. If the Trans-Pacific Partnership agreement were signed their profits would go right through the roof.

US Trade Deficit With China Reaches $225.2Bln in First Half of 2016
"They expected to earn big time from tax-free car exports, primarily to the US. Realizing that as long as Trump is president the TPP will not be happening, they are now looking for other options,” Andrei Fesyun an expert with the Higher School of Economics in Moscow, told Sputnik Japan.

Apparently hating to spoil the current “honeymoon” with Tokyo, President Donald Trump never raised the sensitive issue of the Japanese car market during his recent meeting with Prime Minister Shinzo Abe in Washington.

When exactly the “bomb” he has in store for Japanese carmakers is going to blow up remains to be seen though.