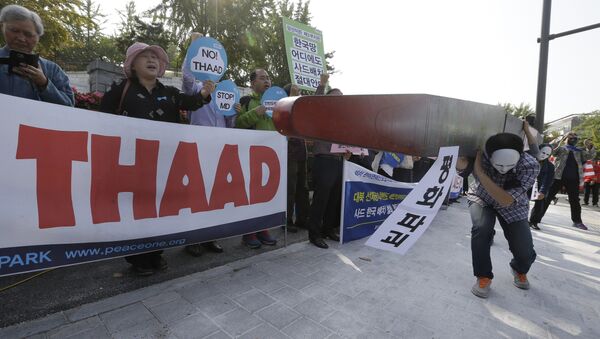 TOKYO (Sputnik) — According to the Yonhap news agency, the talks focused on the deployment of Terminal-High Altitude Area Defense (THAAD) missile system in South Korea that is not welcomed by Russia and key issues between the countries such as economic cooperation.

The THAAD system is designed to intercept short, medium and intermediate ballistic missiles at the terminal incoming stage. In July 2016, Seoul and Washington agreed to deploy the THAAD system in South Korea's Seongju County for countering possible North Korea's threats before the end of 2017.

Asia
THAAD Deployment in South Korea Brings Nuclear War 'Tangibly Nearer'
The two sides also expressed concern over North Korea's repeated violations of UN Security Council's resolution and ongoing tests of ballistic missiles, according to the media outlet. During the meeting, Lavrov and Yun agreed to keep strategic communication in the wake of the growing nuclear threat from North Korea.

North Korea has conducted a number of missile launches in the past months as well as its fifth and biggest nuclear test last September 2015, prompting condemnation from the United Nations.

On February 12, a North-Korean medium-range ballistic missile was fired from an airbase in the western province of North Pyongan and traveled around 300 miles before plunging into the Sea of Japan. The test has been declared successful by Pyongyang.