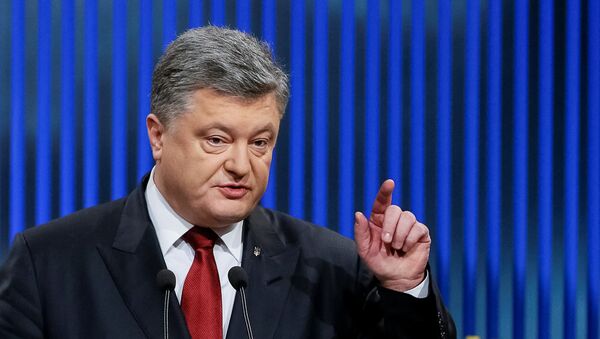 Ukrainian President Petro Poroshenko claimed that the decree of Russian President Vladimir Putin, validating the documents of the residents of the self-proclaimed people's republics of Donetsk and Lugansk (DPR and LPR) in Russia is a "violation of international law."

Russian Foreign Minister Sergei Lavrov explained the decision on the sidelines of the Munuch Security Conference. He said that Russia decided to validate Donbass residents' documents for humanitarian reasons and the presidential decree will stay in force until the Minsk peace deal is implemented.

"I informed [US Vice President Mike Pence] about the recent decision of President Putin to validate the passports of the occupied territories, the so-called LPR and DPR, for me it is yet another proof of Russia's violation of international law," Poroshenko told reporters after a meeting with Pence.

"Ukraine strongly condemns and does not recognize Kremlin's decree that recognized so-called documents, issued in parts of Donetsk and Lugansk territories," the ministry said in a statement.

Russia Urges to End Donbass Blockade at Normandy Talks - Lavrov
The Ukrainian Foreign Ministry said it regarded the decree as "de facto recognition of illegal Donbass authorities," and accused Russia of "violating Ukraine's sovereignty and territorial integrity, its international obligations and the groundwork of the Minsk agreements."

After the eruption of the crisis in Ukraine in 2014, over a million of Donbass residents applied for a refugee status and temporary shelter in Russia. According to Russia's Federal Migration Service, more than 1 million people fled to Russia following the outbreak of the civil war in Ukraine, of whom approximately 600,000 decided to settle there permanently.

Kiev launched a special military operation in Ukraine’s southeast in April 2014, after local residents refused to recognize the new Ukrainian authorities, which came to power as a result of a coup. In 2015, the two sides reached a ceasefire deal brokered by the leaders of the Normandy quartet including Russia, France, Germany and Ukraine in Minsk. Throughout 2016, the Normandy Four and the Organization for Security and Co-operation in Europe (OSCE) have been stressing the need to implement Minsk provisions but Kiev has stalled in giving a special status to Donbass as specified in the agreement. Ceasefire violations have continued.