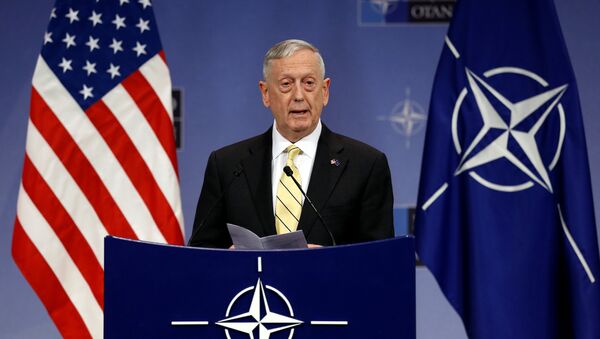 © REUTERS / Francois Lenoir
Subscribe
International
India
Africa
The recent ultimatum delivered by US Defense Secretary has triggered strong reactions across Europe. NATO member states were encouraged to step up their defense outlay - or face shrinking US support. In Scandinavia, even non-aligned Sweden and Finland felt a nervous pang, not to mention dutiful NATO members Norway and Denmark.

'Russian Threat' Forces Finns to Cancel Property Deals, Beef Up Defense
US Defense Secretary James 'Mad Dog' Mattis used his first NATO meeting to assure his European allies of Washington's deep commitment to the alliance, yet also hinted that they forfeit the American protection unless they live up to their spending commitments.

"America will meet its responsibilities, but if your nations do not want to see America moderate its commitment to the alliance, each of your capitals needs to show its support for our common defense," James Mattis was quoted as saying.

At present, NATO has a defense spending target of two percent of a country's gross domestic product (GDP), something only five countries currently meet. Incidentally, Denmark and Norway, which recently voiced concern about Russia's alleged "aggression" and are heavily relying on the US for protection, fall far below the requirement (spending 1.17 and 1.4 percent of their GDP respectively). The US itself currently spends 3.6 percent of its GDP on the military, amounting to $664bln in 2016.

Denmark Braces for Military Buildup Amid Accusations Against Russia
Following the meeting with 'Mad Dog,' Danish Defense Minister Claus Hjort Frederiksen said he was committed to spending more on Denmark's military defenses, despite having repeatedly brushed aside the two-percent-demand as "unrealistic," the last time being only a month ago. Additionally, Hjort Frederiksen repudiated the American pressure, stressing this was "Denmark's own ambition" and citing the change in the security situation in Europe, Danish Radio reported.

Norwegian Defense Minister Ine Eriksen surprisingly said she did not read Mattis's rant as an ultimatum and noted that she could not guarantee that Norway reaches the target, despite the recent increase in the defense outlay.

"We will increase our defense spending every year for the next two decades, and already this year we are spending spend 2.2 billion NOK more ($260mln), Ine Eriksen Søreide told the Norwegian tabloid newspaper Verdens Gang.

Sweden Pals Up With Norway Against Russia, Hails US
The common NATO goal may prove to take a serious dent in Norway's state coffers. As the GDP keeps growing, so do military expenses. In 2024, Norway's military outlay is projected to be 48 percent higher than the 49 billion NOK ($5.9bln) spent today, Norwegian news portal E24 reported.

Mad Dog's rant can prove decisive even for non-aligned Sweden, whose defense strategy has long been built on the premise of US backing. Sweden's "special relationship" was largely tied to the Obama administration's good grace and resulted in the country's defense outlay dropping to about 1 percent of its GDP.

"Now Trump is likely to question why we pay so little and why the US keeps backing Sweden with its tax money," Mike Winnerstig, security policy analyst at the Swedish Defense Research Institute told Swedish newspaper Sydsvenskan, suggesting Sweden would have to invest six times more as today if it were to reach the level it had during the Cold War.

Jan Hallenberg, a professor of political science at the National Defense University, ventured that Americans see the Swedish defense outlay of 1 percent of the nation's GDP as "ludicrously low."

"The major [Swedish] parties want to maintain the special relationship with the US and realize an increase in defense expenditure is needed to keep it," Jan Hallenberg told the Swedish tabloid newspaper Aftonbladet.

Half of Swedes Intimidated by Government's Tall Tales of Russian 'Threat'
Fellow non-aligned nation Finland decided not to wait for the US prod and announced significant defense hikes. The Finnish government recently pledged to boost its annual military budget of 2.6 billion dollars with 160 million starting from 2021. This, however, only corresponds to 1.3 percent of the nation's GDP and falls well below NATO's demands.

During his presidential campaign, US president Donald Trump repeatedly claimed that the US was paying 75 percent of NATO's costs because European countries, struggling with domestic spending problems, were unwilling to contribute their share. Trump also repeatedly called NATO "obsolete."