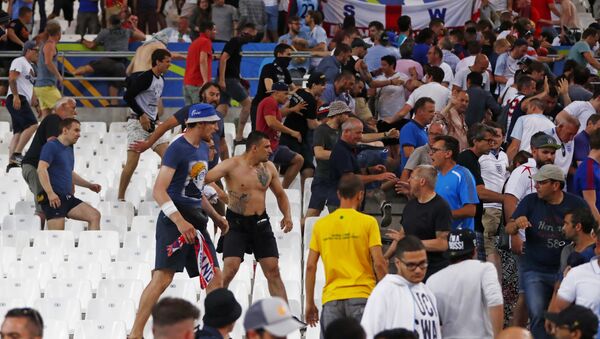 A documentary film by UK national broadcaster BBC, Russia's Hooligan Army, about Russian football fans, was shot with the intention of discrediting Russia ahead of the upcoming 2018 FIFA World Cup in the country, the Russian Embassy in London said on Friday.

MOSCOW (Sputnik) — The film is based on the events of the UEFA Euro 2016 championship in France, when at least 30 people were injured in clashes between Russia and England fans after a football match in Marseille.

​"The film 'Russia’s Hooligan Army' shot and broadcast by BBC Two with Russia-hosted 2018 FIFA World Cup in mind is quite shocking. One gets the impression that its goal is to sow fear in British society and warn the fans against travelling to Russia. Based on edited footage of football fans’ clashes in Marseille and violent Russian fans, the filmmakers from the government-funded channel did their best to discredit Russia and the forthcoming World Cup," the embassy statement reads.

​The embassy added that, for Russia, "ensuring security at the World Cup is a top priority, given the past experience of other European countries."

According to the statement, a similar campaign was carried out before the Winter Olympic Games in Sochi in 2014.

Looking at Russia's Hooligan Army, BBC 1. How is World Cup 2018 being held in Russia? Is FIFA the most corrupt organisation in the world?

​Following the incident in Marseille, UEFA responded by conditionally disqualifying the Russian team, while a number of Russian fans were placed in a deportation center.

Russia will host the FIFA World Cup from June 14 to July 14 in 2018. Tournament matches will be played in cities across the country, including Moscow, Kaliningrad, St. Petersburg, Volgograd, Kazan, Sochi and Yekaterinburg.