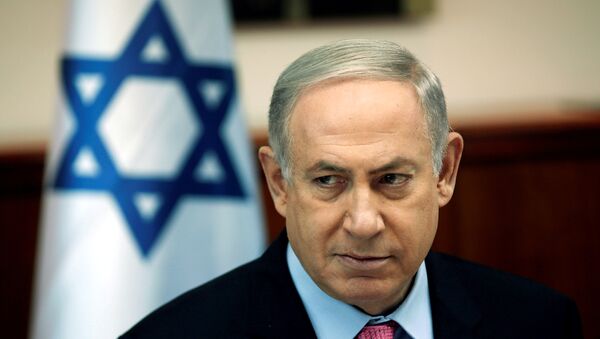 © REUTERS / RONEN ZVULUN
Subscribe
After weeks of police investigations into Israeli Prime Minister Benjamin Netanyahu’s alleged deal to have the country's top-selling newspaper cover him in a more positive light, the Israeli leader will leave his role as communications minister.

Tzachi Hanegbi, of Netanyahu’s right-wing Likud party, will serve as interim director of the communications ministry.

Netanyahu has come under fire in two cases of alleged criminal wrongdoing, in which the veteran prime minister is accused of abusing the powers of his office. Last month, Isaac Herzog of the Zionist Union Party, requested that the Israeli Supreme Court require Netanyahu to resign from the position of communications minister that the latter held alongside his role as prime minister.

Netanyahu and Arnon Mozes, one of the prime minister’s biggest rivals, and publisher of the Yediot Ahronot newspaper, are suspected of engaging in a quid-pro-quo deal behind closed doors. Yair Tarchitsky, chairman of the Union of Journalists in Israel, likened the secret talks as “a little like saying that Donald Trump met with Hillary Clinton on the eve of the election.” Recordings obtained by the Israeli Attorney General’s office purport to document that Mozes gave good coverage of Netanyahu during the 2015 election in exchange for the latter’s help in curtailing the circulation of the free daily Israel Hayom, the Yediot’s number-one competitor.

To add more intrigue to the drama, The Hayom is owned by US casino billionaire and big-time Trump political contributor Sheldon Adelson. Mozes had allegedly requested that Netanyahu enact legislation to remove free newspapers from circulation, and, as long as Netanyahu agreed to advance this agenda, “I will do everything I can to keep you around for as long as you want.” Investigative reporter Raviv Drucker suggested that Netanyahu recorded this part of the conversation to frame Mozes. Currently no bill to quell free newspapers has been passed.

"Netanyahu’s version now is ‘Everything I said in that meeting, in which I presented myself as the one who makes business decisions for Israel Hayom, was a lie--a bluff," Drucker told the New Yorker.

Portions of the recordings between Netanyahu and the newspaper were leaked and then released publicly by Israel’s Channel Two. In one of the recordings, Netanyahu said, “we’re talking about moderation, about reasonable reporting, to lower the level of hostility toward me from 9.5 to 7.5.” The publisher is quoted by the TV station as saying, “We have to make sure that you’re prime minister."

In an additional investigation, Netanyahu and his family members were the beneficiaries of lavish gifts from Israeli billionaire and Hollywood film producer Arnon Milchan. Cuban cigars at $5,000 per month, jewelry, and “pink champagne” for Netanyahu’s wife, Sara, have allegedly been given to Netanyahu by Milchan, as reported by the New Yorker. Australian businessman James Packer allegedly paid for Netanyahu and his family to travel around the world, staying in luxury hotels, the New Yorker added. Netanyahu claimed that gifts he and his family received were just tokens of friendship.