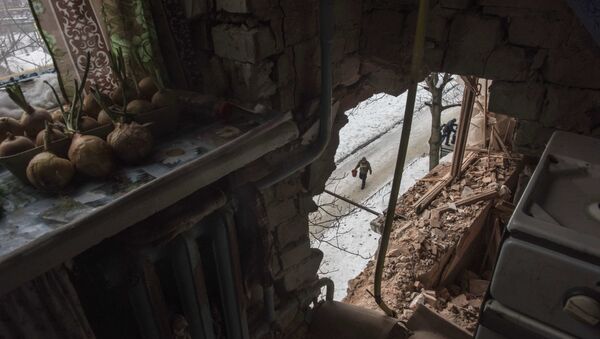 Saturday, the second day of the Munich Security Conference (MSC) in Germany will feature talks on the recent flare-up in eastern Ukraine both on the main agenda and the sidelines.

MOSCOW (Sputnik) — Ukraine, alongside other crisis areas in Eurasia, is expected to be discussed by MSC panelists. Foreign ministers of France, Germany, Russia and Ukraine and will gather for a fringe meeting on Ukrainian peace in the well-established "Normandy Format."

The foreign minister of the host country, Sigmar Gabriel, said Friday diplomats would speak about ways to uphold the ceasefire in Ukraine and ensure that heavy artillery was pulled away from the buffer zone between Ukrainian government troops and militia forces.

On the margins, NATO Secretary General Jens Stoltenberg will have a bilateral meeting with Ukrainian President Petro Poroshenko. Stoltenberg said recently they had been meeting regularly after Kiev sought to join the military alliance.

Separately, Russian Foreign Minister Sergey Lavrov is anticipated to meet with EU top diplomat Federica Mogherini, who said she planned to raise the issue of Libyan reconciliation at the bilateral meeting on Saturday.

World
Strong Support in Canada to Continue Military Aid to Ukraine - Defense Ministry
The breakout of hostilities in eastern Ukraine began in April 2014 as a local counter-reaction to the West-sponsored Maidan coup in Kiev that had toppled legitimate President Viktor Yanukovych in February. Residents of the Donetsk and Lugansk regions held independence referendums and proclaimed the People's Republics of Donetsk and Lugansk. Kiev has since been conducting a military operation, encountering stiff local resistance.