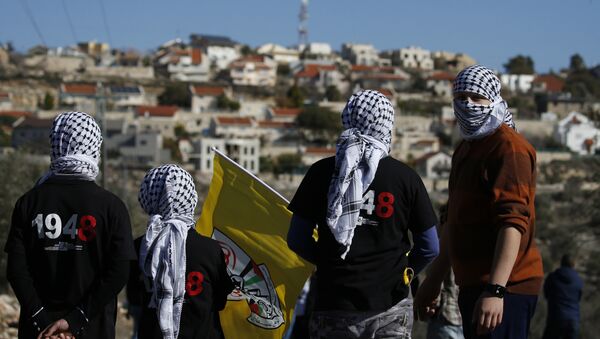 Speaking at a joint news conference with Israeli PM Benjamin Netanyahu, President Donald Trump said that the US would no longer insist on the creation of a Palestinian state. Radio Sputnik discussed the issue with Menachem Klein, professor of political science at Bar Ilan University.

When questioned about his position on Israeli settlements, Trump asked Netanyahu to “hold back on settlements for a little bit.”

In his turn Netanyahu told reporters that he hopes to "reach an understanding" with the American President on the settlements.

“After seeing President Trump, Netanyahu said that he would not restrain Jerusalem settlement expansion, so in Jerusalem we’ll see more settlements and nothing of what Trump requests,” Professor Klein said.

When asked about his overall take on Donald Trump and his decision to step back from decades-long US support for an independent Palestinian state,

Menachem Klein said that he thought that Trump was “ignorant about the details and history of Israeli-Palestinian negotiations.”

US Should Stop Treating Israel With ‘Total Disdain’ - Trump
“He recently said that Palestinians should recognize Israel, but Palestinians recognized Israel back in September 1993. What he is saying is ‘I have many things to do at home, so go and negotiate, that’s it. Whatever you agree, I will support you.’”

Klein added that Israel is much more powerful than Palestine and wants to dictate its terms to the other side without any third party trying to reach a balance.

“This will not lead to an agreement. The Palestinians will not go anywhere and Israel will eventually face a demographic problem or a one-person-one-vote formula and the two-state option will come back to the table.”

Speaking about President Trump’s decision to move the US embassy from Tel Aviv to Jerusalem, Professor Klein said that many Arab heads of state warned Washington to reconsider, arguing that the issue of Jerusalem was even more serious than that of Jewish settlements.

“It is a symbolic act, but it is still very important.”

Meanwhile, signs coming from Washington seem to point out that President Trump’s intended decision to move the US embassy from Tel Aviv to Jerusalem might not be implemented so quickly.

Relocation of US Embassy in Israel to Jerusalem to Complicate Crisis - Mogherini
US policy officially says the embassy should be moved to Jerusalem.

Yet previous US presidents chose not to go ahead with the relocation, using a presidential waiver every six months.  The latest waiver expires in June 1, and it’s unclear if Trump could move the embassy before then.

“Maybe in June, when Israelis and Jews worldwide will be celebrating the 50th anniversary of the Israeli occupation of Jerusalem, Trump will decide to give such a present to Bibi [Netanyahu],” Professor Klein noted.

He added that for Israel the move of the US embassy to Jerusalem would mean official recognition of Jerusalem as part of the Jewish state and the Israeli annexation of the city.

When asked whether the “two-state” concept was viable and workable and whether public opinion could play a role in changing the situation, Menachem Klein said that a two-state solution is possible, but this would not be easy, just like the one-state formula.

“The only way for the one-state solution to become viable is for Israel to become an apartheid state and Israeli is now moving very rapidly towards an apartheid state. As for the public opinion, it will change depending on the circumstances. Here much depends on the Palestinians, who are passive now.”

“But this could change, and the Israeli public opinion in Israel i could change too,” Professor Klein said.