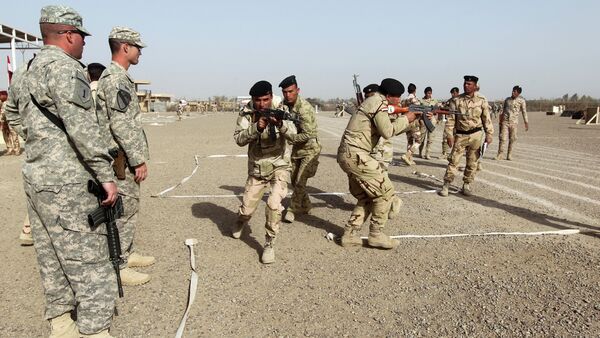 © AFP 2021 / PHOTO/AHMAD AL-RUBAYE
Subscribe
About 5,000 Iraqis have finished months-long training to join the campaign to liberate Mosul and fight against the Daesh terror group (outlawed in Russia), US Central Command (CENTCOM) announced in a release on Friday.

WASHINGTON (Sputnik) — In January, Iraqi and US-led coalition forces liberated the eastern part of the city that was captured by Daesh in June 2014.

"The Iraq security forces have nearly 5,000 more personal to assist as hold forces in Eastern Mosul and eventually in the fight against ISIS [Daesh] in western Mosul following recent graduation ceremonies at Taji, Besmaya, Erbil, and Al Asad Air Base," the release said.

"At Taji and Besmaya, the release added, nearly 2,000 Ninewah policemen "graduated and are poised to assist in the fight against ISIS [Daesh] in Mosul."

Coalition Forces Annihilate Head of Daesh Military Police in Mosul
Moreover, 300 Iraqi soldiers graduated for patrol and clearing techniques at the Al Asad Air Base, a program led by the combined efforts of Danish, British, Latvian, Estonian and US forces.

The city’s western part still remains under control of the terrorist group.