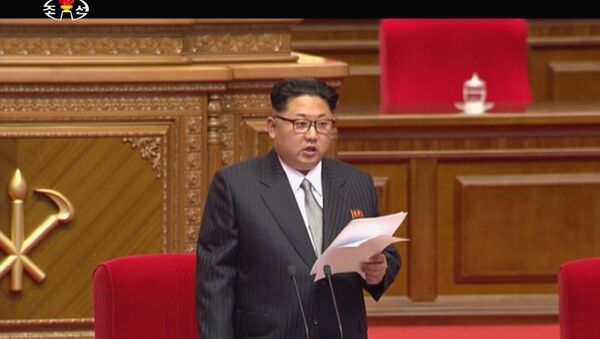 North Korea's Missile Prep Time 'Effectively Nullifies' South's Defenses
WASHINGTON (Sputnik) — On Sunday, North Korea carried out a successful test of its Pukguksong-2 intermediate-range ballistic missile. The Pukguksong-2 can carry a nuclear payload, and has an estimated operational range of up to 2,000 km (1,200 miles).

"North Korea has conducted more missile tests in the past two years than during the entirety of Kim Jong-il's time as leader," Australian foreign policy analyst Crispin Rovere said on Wednesday. "This pace reflects a commitment to securing a credible nuclear deterrent."

Kim Jong-il, the father of Kim Jong-un, was North Korea’s effective ruler from the early 1980s until his death in 2011.

The test marked a major advance for the Pyongyang regime in its efforts to build ballistic missiles that could be launched before being destroyed in preemptive strikes, Rovere pointed out.

"The latest test used a solid fuel propellant which is a breakthrough for North Korea. This requires far less preparation time to launch, and the North's new mobile launcher allows it to go off road, making it more survivable in a crisis," Rovere explained.

Trump Calls North Korea a 'Big Problem', Vows to Deal With Pyongyang 'Strongly'
The test took place during US President Donald Trump's meeting with Japanese Prime Minister Shinzo Abe in the US state of Florida, guaranteeing that North Korea would dominate the agenda between the two men, Rovere observed.

The missile launch "ensures that the Hermit Kingdom cannot be ignored by the international community," he said.

Rovere also predicted that North Korea would soon seek to test a nuclear weapon that could be delivered on missiles.

"It is only a matter of time before North Korea successfully conducts a long-range nuclear test, demonstrating that its arsenal has been miniaturized and combined with long-range delivery vehicles," he added.

Such a test would present President Trump with a difficult choice, Rovere foresaw.

"At that point the United States will either have to make a humiliating deal with Pyongyang, or undertake drastic action that carries enormous risk for America and its allies," he said.

"The more the US responds to North Korea, the more the Chinese will feel the need to respond," he said.

Winnie said the timing of the Pukgukspong-2 test suggested that Pyongyang was worried that Trump and Abe intended to step up pressure or take more serious actions against their country.

"They are deeply worried about the US alliance with Japan. The North Koreans want the United States to back off," he said.

However, Trump was unlikely to take bellicose actions by the North Koreans such as the missile test passively and was more likely to step up US and international pressures against Pyongyang, Winnie concluded.