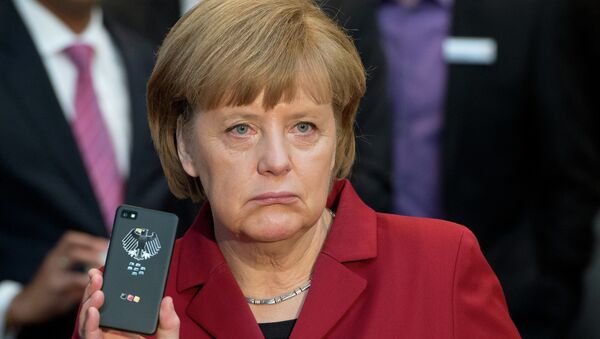 © AFP 2021 / Julian Stratenschulte
Subscribe
On Thursday, German Chancellor Angela Merkel is expected to give testimony on the 2015 espionage scandal where Germany's Federal Intelligence Service (BND) came under heavy criticism when it became known that it helped US intelligence agencies spy on European institutions.

German Government Knew About NSA Espionage on Its Soil Since 2001
In an interview with Sputnik Germany, André Hahn, a Bundestag MP and a member from the Die Linke Party commented on the issue.

In particular, the politician recalled Merkel's statement from 2013, in which she said that "spying among friends is unacceptable." The politician agreed with this position, but stressed that now Merkel will have to explain to the Bundestag investigatory committee how spying took place on those in her own ranks and why she wasn't informed about the situation.

"The idea she expressed at that time is absolutely correct and understandable. However, we already know that the BND service did the same things [as the NSA]. Perhaps on a smaller scale than the NSA, but it also spied on many European governments, ministries, international organizations, non-governmental organizations, etc. And in all these cases, it violated legal norms, laws and the Constitution," Hahn said.

The investigatory committee into the German Bundestag was established in 2014 and was tasked with finding out how and to what extent foreign secret services had been spying on European citizens, including German high-ranking politicians and top-officials. Later, a series of documents also revealed that not only the NSA, but also the BND was actively involved in espionage against German citizens.

The Renaissance of Classic Espionage: Major Powers Revive Intelligence Warfare?
Thus, in 2015 media reports said that the BND had systematically spied on its friends and allies worldwide. According to Spiegel Online magazine, in many cases the BND carried out this policy on its initiative and not at the request of US intelligence.

According to Hahn, there are a lot of questions in this regard which need to be clarified. Primary among them is whether the Chancellor was aware of the actions of German intelligence and if so, to what extent.

"It means either she was giving the public a false picture despite the fact that she was aware of it all. Or she really knew nothing and believed in what she said. But then the question is: does intelligence have the right to act entirely on its own? And, who, actually, exercises control over it?" the politician said.

Hahn views the situation as completely unacceptable, especially due to the fact that no conclusions have been made so far and responsible parties have yet to be specified, with all officials keeping their posts.

He also noted that he refuses to believe ordinary employees could have made decisions to spy on high-ranking officials and international organizations without permission from higher management.

000000
Popular comments
She is beeing given the benefit of a doubt that she does not deserve.