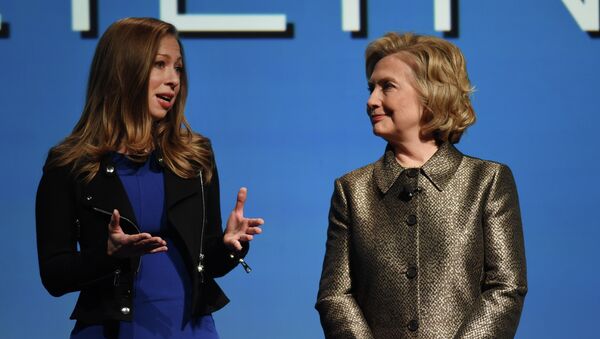 © AFP 2021 / Don Emmert
Subscribe
Chelsea Clinton, the Vice Chair of the Clinton Foundation, co-wrote a book called Governing Global Health: Who Runs the World and Why?, and absolutely nobody is reading it.

The book, which the former First Daughter has barely bothered to promote, currently stands at No. 74,374 on the Amazon Bestsellers Chart.

“Did the fact that her mother lost the race to ‘run the world’ to Donald Trump now render this book less relevant to the Clintons? Was it to have coincided with some health initiative that Chelsea would have spearheaded if her mother was president?” Tom Teodorczuk asked in an article for Heat Street.

“An even-handed and thorough empirical analysis of one of the most pressing topics in world affairs, Governing Global Health will reshape our understanding of how organizations can more effectively prevent the spread of communicable diseases like AIDS and reduce pervasive chronic health problems like malnutrition,” the book summary on Amazon explains.

Released on February 9, with no fanfare, it had a review of 1.6 stars out of 5, based off of 41 customer reviews on Wednesday.

“As superficial and boring as its author, who has received a free ride her entire life,” one reviewer wrote.

“How do Chelsea and her unemployed husband live in an apartment in NYC with a hallway as long as a city block? Thank God that her corrupt mother did not win or this book would be #1 on the Amazon list because foreign governments would be buying it by the boatload to ingratiate themselves to the Clinton Crime Syndicate,” another review stated.

Clinton, Kaine Release Official Campaign Book ‘Stronger Together'
Another reviewer, who claimed to be a Democrat, was simply stunned that Clinton would put out a book on globalism given the current political climate.

“I am a democrat, and I made it through maybe 25 pages. Holy hell that was horrible. Is this woman really that stupid to put a book out about globalism when America, the UK, and Italy rejected globalism recently? If she is this out of touch, I hope we don't see her much in the future,” an anonymous reviewer wrote. “Your mom made our party look bad. I think if Chelsea runs in the future, she would probably lose at this moment in time. Wow the Clinton's are done as a family in politics. Unbelievable. But probably for the best. Corrupt people for sure.”

Her mother, Hillary Clinton, has not had much success in her recent venture into the world of books, either. ‘Stronger Together,A Blueprint for America's Future’ a book she co-authored with her running mate Senator Tim Kaine also flopped. It sold less than 3,000 copies during the first week of sales and currently ranks  #89,681 overall on Amazon's Best Sellers list.