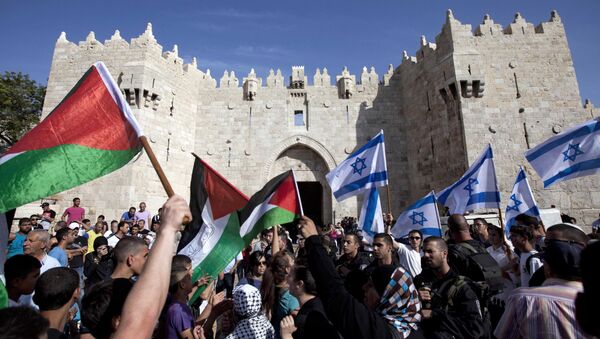 © AP Photo / Sebastian Scheiner
Subscribe
International
India
Africa
The Palestinian leadership has not received a notification from the United States on the rejection of the two-state solution principle and believes that it is still relevant, Husam Zomlot, Strategic Affairs Adviser to the Palestinian president, told Sputnik.

GAZA (Sputnik) — A White House official said Tuesday that the United States would not insist on implementation of the principle of a two-state solution to the Palestinian-Israeli conflict.

"We have not received any official notification from the White House… The idea of 'two states' was not a Palestinian proposal. It is an international proposal, and Palestine is complying with it," Zomlot said.

Ahmed Majdalani, member of the Executive Committee of the Palestine Liberation Organization (PLO), told Sputnik that the United States would make a big mistake if the new administration implemented the policy in accordance with the pre-election statements of US President Donald Trump, who criticized ex-President Barack Obama for exerting pressure on Israel.

"This position is not new, we heard it during the election campaign of President Trump. The United States will make a big mistake if it leaves the conflict open, without fair settlement, which also implies creation of an independent Palestinian state with the capital eastern Jerusalem as well as solving the refugee issue," Majdalani said.

The concept of a two-state solution to the ongoing conflict between Israelis and Palestinians stipulates creation of "two states for two groups of people." It has long been viewed by the international community as the only realistic way to end the conflict.