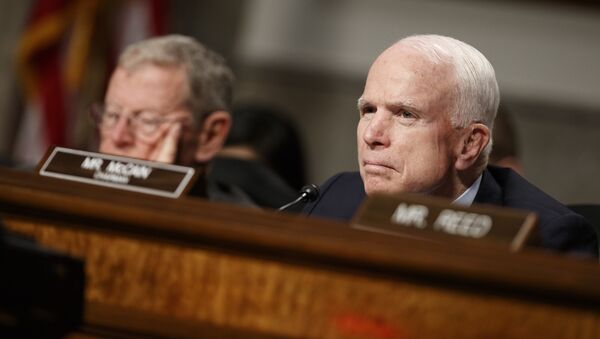 John McCain, a hawkish US Senator known for his anti-Russia position, has called for boosting US deterrent posture in Europe after reports emerged alleging Moscow has secretly deployed nuclear-tipped ground-launched cruise missiles in violation of the 1987 Intermediate-Range Nuclear Forces (INF) Treaty.

The news comes as US media reported that Russia deployed ground-based nuclear cruise missiles in violation of the 1987 Intermediate-Range Nuclear Forces (INF) Treaty.

The Pentagon supported the review of alleged the INF Treaty violations.

The treaty prohibits the development, deployment or testing of ground-launched ballistic or cruise missiles with ranges between 300 and 3,400 miles. It was implemented by 1991 with inspections carrying on until 2001.

"Russia’s treaty violation requires a meaningful response," McCain stated in the release on Tuesday. "In light of the most recent developments, it is time for the new administration to take immediate action to enhance our deterrent posture in Europe and protect our allies."

McCain claimed Russia’s violation of the INF treaty is a significant threat to US forces in Europe and its NATO allies, the release stated.

The United States should continue to modernize its nuclear forces and ensure NATO’s nuclear deterrence forces are prepared to counter Russian nuclear doctrine, which calls for the first use of nuclear weapons, McCain added.

Russia has rejected the accusations, and said that the United States deploying its Europe-based missile defense system violates the INF treaty.