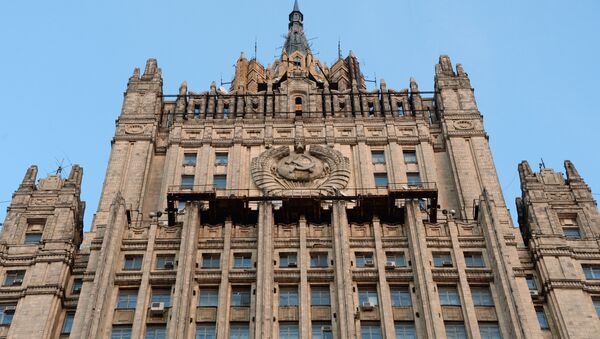 © Sputnik / Natalia Seliverstova
/
Go to the photo bank
Subscribe
The Russian Foreign Ministry's spokeswoman described Atlantic Council's report about alleged violations in Syria as an attempt to add fuel to the fire of the conflict.

"We have registered attempts to add fuel to the fire of the Syrian conflict, to aggravate the disagreements between the conflicting parties. That is the only possible way to look at the disinformation spread by Amnesty International, Human Rights Watch and, finally, US-based Atlantic Council with the help of CNN about alleged cases of the Syrian Armed Forces using chemical weapons in Aleppo, mass executions in the Saydnaya military prison near Damascus, purposeful destruction of Syrian social and economic infrastructure by the Russian Aerospace Forces," Zakharova said.

Russian MoD Slams HRW's 'Amateurish' Claims Syrian Army Used Chemical Weapons
The sensational revelations lack proof, but that is of little importance to the authors, whose goal is to sabotage the possibility of a peaceful resolution of the Syrian conflict, Zakharova added.

On February 7, Amnesty International issued a report accusing the Syrian authorities of killing up to 13,000 people at the Saydnaya prison in five years. Syrian President Bashar Assad said in an interview with Yahoo News that the report was not true and based on allegations. Commenting on the paper, the Syrian Justice Ministry called the allegations made in the report illogical.

On Tuesday, Russian Defense Ministry spokesman Maj. Gen. Igor Konashenkov said the ministry studied the report and found that all allegations against Russia included in it had been already refuted before.