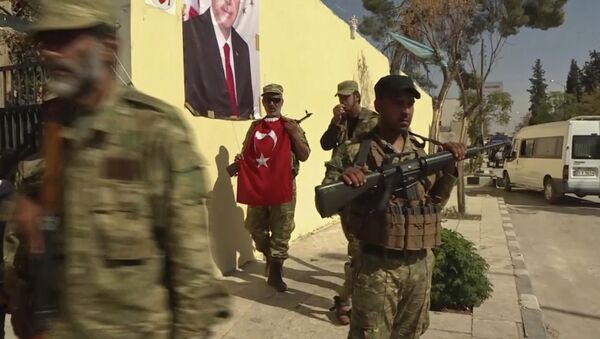 © AP Photo / Qasioun News Agency
Subscribe
International
India
Africa
Commenting on the recent promise of President Erdogan that the Turkish army will advance onward to the Syrian city of Raqqa to cleanse it from jihadists, Turkish retired Major General Ahmet Yavuz told Sputnik Turkiye that the de facto Daesh capital might become a quagmire for his country's forces; here is why.

Turkish Deputy PM Calls Seizure of Raqqa by Kurds a Security Threat to Turkey
On Sunday, Turkish President Tayyip Erdogan said that the final goal of what he called "a Turkish incursion into Syria" was not just to retake the city of al-Bab from Daesh (Islamic State/ISIS/ISIL), but to cleanse the border region, including Raqqa, of the jihadists.

"The ultimate goal is to cleanse a 5,000-square-km area," Erdogan told a news conference before his departure on an official visit to Bahrain, Saudi Arabia and Qatar.

He said Turkish forces had no intention of staying in Syria once the area had been cleared of both Daesh and Kurdish YPG militia fighters, whom Turkey sees as a hostile force.

Commenting on the remarks of his president, Turkish retired Major General Ahmet Yavuz told Sputnik Turkiye that Raqqa, however, might become a quagmire for his country's army.

"I think the city of Raqqa is the most dangerous point for the Turkish army. The operation to liberate the city from jihadists might become a quagmire where the Turkish forces become bogged down for an uncertain period of time, which will lead to very serious consequences," he told Sputnik.

He further explained why he thinks that Turkey should refrain from the operation to liberate the city from jihadists.

The key aim of the Turkish forces is to set up a security shield in the north of Syria, on the Turkish–Syrian border, and to prevent the establishment of a Kurdish corridor, he said.

Turkey’s Plan for Participation in Raqqa Offensive Remains Unclear - US General
However it remains unclear what is easier to do now – to enter Raqqa or leave it without getting bogged down. The demographic and social structure of this city differs greatly from that of al-Bab, where Turkey is currently pressing a major offensive.

Ahmet Yavuz thinks that the Turkish army should instead cooperate with Syrian government forces and support them during the operation to liberate Raqqa.

However, he further noted that while Turkish aerial forces and even special units might take part in the offensive, participation of his country's ground forces might lead to serious consequences.

"Turkey is pursuing the right strategy, trying to weaken the influence of the Kurdish Democratic Union party (PYD) and the Kurdish People's Protection Units (also known as the People's Defense Units or YPG) in the region. However the conditions in Raqqa differ greatly from those in al-Bab," he said.

The retired major general further explained that during the operation in al-Bab, Turkish armed forces have not faced any negative reaction among the local population. However, the situation has been changing while they were moving further to the east of the Euphrates.

"I think it would be wrong to undertake more responsibility in the ground operation without clear understanding of the situation in Manbij (a city in Syria's Aleppo Governorate, 30 kilometers west of the Euphrates)," he said.

Turkey needs to rightly estimate its abilities and strengths, he finally stated.