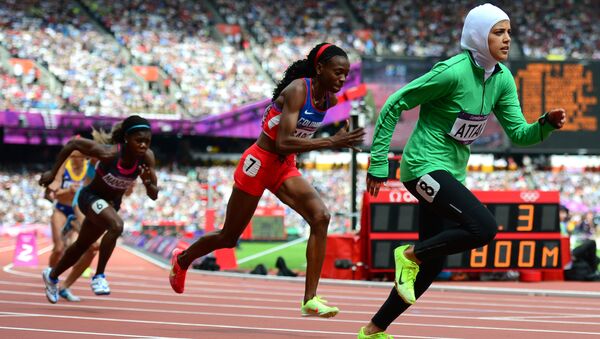 © AFP 2023 / OLIVIER MORIN
Subscribe
International
India
Africa
The Saudi Arabian General Authority of Sports has announced that the first female gyms will open in the Kingdom at the end of February. Only gyms meant to promote weight loss and fitness will receive licenses- those meant to promote competitive sports will be denied.

The target is for a women's gym in every district and neighborhood in the capital city of Riyadh, according to Princess Reema bint Bandar. The crown hopes to involve entrepreneurs to handle the construction and promotion of such venues, albeit with government aid. As many as 250,000 jobs could be created by the initiative, said Princess Reema.

Sports such as swimming, running, and weightlifting will be offered at these gyms. Competitive sports such as association football, volleyball, basketball, and tennis will not be available.

While the Saudi government has traditionally discouraged women from participating in sports, Princess Reema claims that the health benefits are not something they can ignore any longer. "It is not my role to convince the society, but my role is limited to opening the doors for our girls to live a healthy lifestyle away from diseases that result from obesity and lack of movement," she told Saudi newspaper Okaz.

Princess Reema has made a name for herself as a champion of women's rights in Saudi Arabia. Having spent most of her youth in the United States and France, she has worked to increase female participation in the workplace, fight breast cancer, and organize a national women's day that occurred on February 3.

Although Saudi Arabia does not collect data on obesity within the country, the Centers for Disease Control and Prevention (CDC) found that Saudi women are 39% more likely to be obese than men.

The General Authority of Sports created a women's division in 2016 to address this problem, a division that Princess Reema is the vice president of. Female athletes from the Kingdom only participated in the Olympics for the first time in 2012.

Saudi women are still prohibited by law from operating motor vehicles, going out in public unattended by men, trying on clothes while shopping, or representing themselves in a court of law.