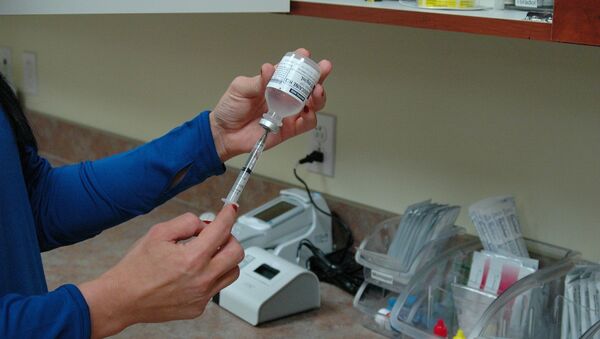 © Photo : Pixabay
Subscribe
Denmark's outgoing Health Minister Ellen Trane Nørby is having a hard time explaining why the Danish government notoriously sold a state-owned vaccine manufacturing facility to a Saudi company with alleged links to proponents of extreme Islam after an unpleasant revelation by a Danish newspaper.

Norwegian Ex-Ambassador Clamors Against Saudi-Sponsored Spread of Extreme Islam
The vaccine production facilities of the Danish State Serum Institute (SSI) have been sold to Aljomaih Group, which is owned by a Saudi family dynasty with alleged extremist links. Previously Aljomaih Group, which is led by Sheikh Abdul Aziz Hamad Aljomaih, had given donations to the Muslim Brotherhood, an Islamist political organization, via its bank Arcapita, the Danish tabloid newspaper Extra Bladet revealed. To make matters worse, the new owners are advocates of Sharia law and employ people who had previously encouraged a boycott of Denmark.

The 15 million DKK deal ($2.15mln) was initiated in 2014 under the previous government, led by Helle Thorning-Schmidt, when a cross-party parliamentary finance committee approved of Aljomaih as a legitimate buyer. This happened despite the fact that Arcapita's Sharia committee is headed by a powerful Muslim cleric, Mohammed Taqi Usamani, who had previously called for a boycott of Denmark during the controversy about the Muhammad cartoons in 2006.

"We've been against selling SSI's vaccine factory and diagnostics facilities from day one. We are talking about critical infrastructure that can impact on emergency preparedness against biological warfare and terror, and we don't think that should be sold to the private sector," Red-Green Alliance Pelle Dragsted told Extra Bladet, invoking traditional socialist arguments against privatization in general.

Sycophant Swedish PM Gives Kudos to Women’s Rights in Saudi Arabia
Security concerns over a possible shortage of vaccines have been raised by other experts as well.

"One must be very careful when outsourcing key activities such as vaccine production to a country like Saudi Arabia," Middle East expert Helle Lykke Nielsen from the Southern Danish University told Extra Bladet, warning of unpredictable consequences for Danish healthcare.

Another cause of concern is that Aljomaih's subsidiary AJ Vaccines will deliver serum shots for Danish children for a period of at least 30 months.

"Selling key manufacturing facilities such as those producing vaccines to ideologically hostile countries which, for whatever reason, may abruptly decide to shut down production, does not sound like a good idea. Those who say that the Saudis are merely interested in profit like anyone else should know better," American terrorism expert Rachel Ehrenfeld, director of the American Center for Democracy and its Economic Warfare Institute, told Extra Bladet.

Feminist Sweden Puts on Hijab in Hope of Doing More Business With Iran
The State Serum Institute, which was founded in 1902, is responsible for Denmark's preparedness against infectious diseases, congenital disorders and biological threats.

Danish Health Minister Ellen Trane Nørby defended the largely controversial deal by contending there was a shortage of prospective buyers. However, Trane Nørby is unlikely to face the consequences of this deal, as she is due to go on maternity leave on February 20 and will be replaced by incumbent Equality Minister Karen Ellemann.

000000
Popular comments
It is much worse that just shutting down production without notice. It is possible that a large number of people could get more than just a vaccine. Something subtle that could take some time to surface, thus making it difficult to link source to effect? I don't think this is what the Danish people were expecting from their government! Further, if the Saudis bought this for the profits, any monies that the Danish government earned from the sale will soon be dissipated paying higher prices for vaccines. This is a lose for the Danish people in every way.
Erik Trete
14 February 2017, 15:42 GMT
000000
Newsfeed
0
New firstOld first
loader
LIVE
Заголовок открываемого материала
Access to the chat has been blocked for violating the rules . You will be able to participate again through:∞. If you do not agree with the blocking, please use the feedback form
The discussion is closed. You can participate in the discussion within 24 hours after the publication of the article.
To participate in the discussion
log in or register
loader
Chats
Заголовок открываемого материала
Worldwide
InternationalEnglishEnglishMundoEspañolSpanish
Europe
DeutschlandDeutschGermanFranceFrançaisFrenchΕλλάδαΕλληνικάGreekItaliaItalianoItalianČeská republikaČeštinaCzechPolskaPolskiPolishСрбиjаСрпскиSerbianLatvijaLatviešuLatvianLietuvaLietuviųLithuanianMoldovaMoldoveneascăMoldavianБеларусьБеларускiBelarusian
Transcaucasia
ԱրմենիաՀայերենArmenianАҧсныАҧсышәалаAbkhazХуссар ИрыстонИронауОssetianსაქართველოქართულიGeorgianAzərbaycanАzərbaycancaAzerbaijani
Middle East
Sputnik عربيArabicArabicTürkiyeTürkçeTurkishSputnik ایرانPersianPersianSputnik افغانستانDariDari
Central Asia
ҚазақстанҚазақ тіліKazakhКыргызстанКыргызчаKyrgyzOʻzbekistonЎзбекчаUzbekТоҷикистонТоҷикӣTajik
East & Southeast Asia
Việt NamTiếng ViệtVietnamese日本日本語Japanese俄罗斯卫星通讯社中文（简体）Chinese (simplified)俄罗斯卫星通讯社中文（繁体）Chinese (traditional)
South America
BrasilPortuguêsPortuguese
NewsfeedBreaking
07:33 GMTEight Dead, 7 Missing in China After Passenger Ship Capsizes
07:33 GMTBoris Johnson Slammed for 'Casual' Approach to National Security, 'Unclear Prioritisation of Risks'
07:16 GMTBritish Boxer Amir Khan 'Kicked Off' US Flight Over Row About Colleague's Face Mask
06:55 GMTAs US Prepares to Leave Iraq, Ex-Advisor to Iraqi President Says Kurds Need Reliable Partners
06:52 GMTTwo Women Arrested for Tearing Up Trump Signs and Snatching MAGA Hat From Child Escape Jail Time
06:46 GMT'F**k Joe Biden!' New Yorkers Take to Streets to Protest Vaccine Mandates, Link COVID Rules to Nazis
05:56 GMTAustralia May Rent or Buy Nuclear Subs From US, UK Until Its Own Fleet is Built Under AUKUS Deal
05:34 GMTColombia Condemns Maduro’s Participation in Celac Summit
05:14 GMTOver 50 London Police Officers Deployed to Oxford Street After Reports of Gunman - Video
04:30 GMTNot My Style: Adorable Golden Retriever Doesn't Like Wearing Shoes
04:26 GMTLive Updates: India Registers 30,773 New COVID-19 Cases
03:52 GMTMeghan Markle Wears Earrings Made of Same Diamonds That Decorate Her Mysterious Pinky Ring - Report
03:12 GMTIsraeli Security Forces Capture Last Two Fugitives Who Escaped From Gilboa Prison, IDF Says
03:10 GMTFrench Blindsided as AUKUS Details Were Discussed at G7 Summit Leaving Macron Out - Report
02:25 GMTBiden Administration Worried High-Level UN Meetings Will Become COVID-19 ‘Superspreader’ - Report
01:40 GMTKhamenei Pledges Support to Iranian Athletes Who Refuse to Compete With Israelis
01:25 GMTAOC Met Gala Dress Designer Owes Multiple Taxes for Withholding Worker Benefits, Income Checks
YesterdayFrance Decries UK's 'Opportunism' And Participation in AUKUS, Calling London 'Fifth Wheel'
YesterdayMayor of Johannesburg Killed in Car Accident - Reports
YesterdayPython Falls From Rooftop in Australia After House Sheathed From Snakes - Photos