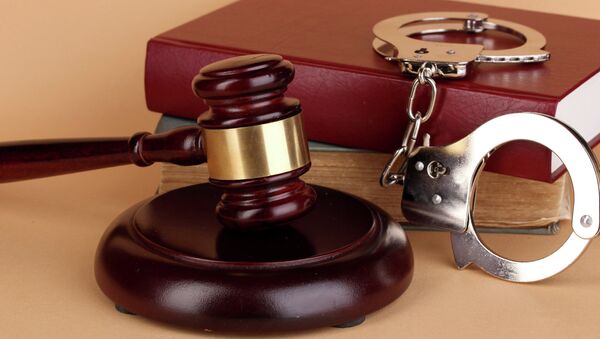 © Photo : Africa Studio
Subscribe
For the first time in its history, Denmark has charged a woman with terrorism. The morbid debut involves a 16-year-old Danish girl, who converted to Islam and intended to blow up a historic Jewish school.

Pillaged Syrian Artefacts for Sale in Denmark
The girl was arrested in January 2016 for possessing explosives. Later it emerged that the explosive TATP (which is also known as acetone peroxide and was used in the November 2015 Paris attacks) was meant to be used in an attack against two schools in Denmark, Danish Radio reported.

Due to the delicate nature of the case and the amount of sensitive information, much of the data in the so-called "Kundby case" (named after the village where the girl was arrested) has been withheld from the public. The court hearings are being held behind "double-locked" doors.

Last Friday, the Copenhagen Public Prosecutor's Office announced that the 16-year-old girl has been charged with an attempted terror attack for her plans to bomb the private Jewish school Carolineskolen in Copenhagen together with her own school, Sydskolen in Fårevejle. The girl was reportedly far along with her preparations to make a bomb. She was also planning a test explosion, which constituted solid grounds for terrorism charges. The trial will begin in April, and the 16-year-old is facing a minimum four-year sentence.

"This case says something about what we are fighting against: that the disease of jihadism and extremism is something that can affect anyone," Conservatives spokesman and renowned critic of radical Islam Naser Khader, who recently made headlines after confessing a female relative had sworn allegiance to Daesh (ISIS/ISIL), told Danish Radio. "A girl of Viking background, who did not live in a ghetto area, has been recruited to carry out an act of terrorism. This is all very serious," he added.

Danish Islamists Unbothered by Calls to Ban Sharia Law on Gov’t Premises
In the same announcement issued by the Prosecutor's Office, a 25-year-old man who had previously been arrested in connection with the case was released without any charges filed against him, despite having reportedly fought alongside extremists in Syria and being previously described as a "friend" of the girl.

The girl, who was only 15 at the time of her arrest, was described as a recent convert to Islam. One of her neighbors told the Danish tabloid newspaper BT that she aspired to convert fellow Danes to her newly-found religion as well.

According to Danish TV channel TV2, the girl's profile on the social media indicated that she was a member of a Facebook group for Danish supporters of Hizb ut-Tahrir, which is a radical Islamist organization openly supporting the establishment of a hardline caliphate. Previously, Hizb ut-Tahrir, which has been the focal point of many controversies, was banned from using municipal premises.

Carolineskolen is a private Jewish school in Copenhagen, where in addition to the usual curriculum, students also receive instruction in Hebrew. The school was founded in 1802 and claims to be one of the oldest functioning Jewish schools in the world. Previously, the school has repeatedly been targeted by anti-Semites, who smashed windows and sprayed its walls with ethnic slurs.

000000
Popular comments
and things will only get worse...
michael
13 February 2017, 11:37 GMT
000000
Thank you for the article but your title is a classic dog whistle, I am sure as a professional news organization you are familiar with 'entrapment' why Sputnik? you are publicly funded so it's not the money, what do you gain from this? you are only fanning the flames... otherwise keep up the good work, sincerely
freeWill
13 February 2017, 14:34 GMT
000000
Newsfeed
0
New firstOld first
loader
LIVE
Заголовок открываемого материала
Access to the chat has been blocked for violating the rules . You will be able to participate again through:∞. If you do not agree with the blocking, please use the feedback form
The discussion is closed. You can participate in the discussion within 24 hours after the publication of the article.
To participate in the discussion
log in or register
loader
Chats
Заголовок открываемого материала
Worldwide
InternationalEnglishEnglishMundoEspañolSpanish
Europe
DeutschlandDeutschGermanFranceFrançaisFrenchΕλλάδαΕλληνικάGreekItaliaItalianoItalianČeská republikaČeštinaCzechPolskaPolskiPolishСрбиjаСрпскиSerbianLatvijaLatviešuLatvianLietuvaLietuviųLithuanianMoldovaMoldoveneascăMoldavianБеларусьБеларускiBelarusian
Transcaucasia
ԱրմենիաՀայերենArmenianАҧсныАҧсышәалаAbkhazХуссар ИрыстонИронауОssetianსაქართველოქართულიGeorgianAzərbaycanАzərbaycancaAzerbaijani
Middle East
Sputnik عربيArabicArabicTürkiyeTürkçeTurkishSputnik ایرانPersianPersianSputnik افغانستانDariDari
Central Asia
ҚазақстанҚазақ тіліKazakhКыргызстанКыргызчаKyrgyzOʻzbekistonЎзбекчаUzbekТоҷикистонТоҷикӣTajik
East & Southeast Asia
Việt NamTiếng ViệtVietnamese日本日本語Japanese俄罗斯卫星通讯社中文（简体）Chinese (simplified)俄罗斯卫星通讯社中文（繁体）Chinese (traditional)
South America
BrasilPortuguêsPortuguese
NewsfeedBreaking
16:17 GMTUS House Speaker Pelosi Vows to Pass Temporary Funding Bill to Keep Government Open
16:11 GMTResignation of US Special Envoy for Haiti Over Deportations 'Mischaracterised', State Dept. Suggests
15:44 GMTUS Health Official Wants to 'Blow-Dart' COVID Vax Into Black People in New Project Veritas Video
15:25 GMTTaliban Plans to Form Commission in 2022 to Draft New Constitution
15:22 GMTWatch Fuego Volcano Erupt in Guatemala, Spewing Out Vast Amounts of Smoke and Lava
15:17 GMTRussian Officials Assess Proposal to Populate Siberia With 'Resurrected' Woolly Mammoths
15:13 GMTParis to Bill Canberra for Cancellation of Submarine Deal After AUKUS Pact
14:51 GMT'Britney VS Spears': Pop Star's Fiancé Accuses Docu Makers of Earning Profit From Her Story
14:41 GMTRussian Union of Journalists Chief Slams 'Unacceptable' US Sanctions Against Colleagues
14:31 GMTUS Investment Firm Purchases Italy's Oldest Football Team
14:29 GMTUS to Find Ways to Get More Help to Haitian Migrants After US Envoy Resigned, State Dept. Says
14:25 GMTAnthony Joshua Says He Would ‘Fight King Kong' if He Had to as He Defends Titles Against Usyk
14:18 GMTFormer Nazi Helmut Oberlander Dies in Canada Before He Could Be Deported, Reports Say
14:07 GMTWhat's Behind Africa's Increasing Drive to Launch Satellites?
14:06 GMTExpo 2020 in Dubai Set to Boost Economic Development in Arab World, Organiser Says
13:58 GMTTwo Afghan Evacuees Charged With Sexual, Physical Assault in US, Justice Department Says
13:51 GMTBritish Government Preparing for 'Worst-Case Scenario' of Gas Prices, Says MP
13:43 GMTOutrage as Missouri High School Students Reportedly Come Up With Petition to Reinstate Slavery
13:42 GMTEC Does Not Expect Increase in Smartphone Prices Over Universal Charging Port Regulation
13:26 GMTAmericans Favour Trump Over Biden After Afghanistan Pullout Disaster, Poll Says