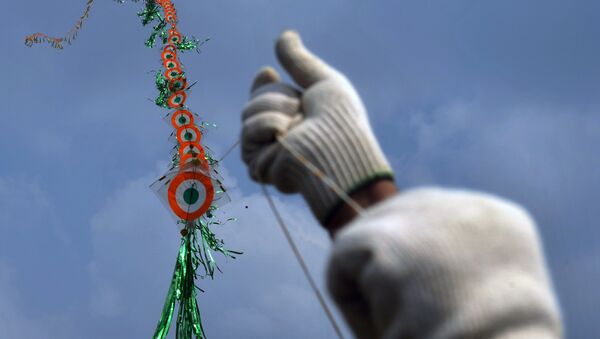 © AFP 2021 / DIPTENDU DUTTA
Subscribe
107 have been arrested in Pakistan’s capital city of Lahore for flying kites. A 2009 law outlawed the construction, sale, or use of kites in Punjab, the province where Lahore is located.

A spokesman for Zahid Mehmood Gondal, the Senior Superintendent of Police, said that the police launched a weekend crackdown that led to the arrests. In addition, 800 kites and 230 rolls of string were seized.

The spokesman added that flying a kite is a public hazard and urged parents to prevent their children from doing so. "Those who will provide their rooftops to kite fliers will also face same penalty," he also said.

The ban is rooted in a 2005 incident where several were killed by kites with sharp or glass-coated strings. The kites were being flown for the festival of Basant, which celebrates the beginning of spring. "Kite fighting", a sport in which the kite's strings are sharpened so flyers can purposefully cut the strings of other kites, led to at least 18 deaths and 24 injuries from 2006-09.

The kite-flying ban was coupled with a general ban on the festival of Basant. The festival is secular but of Hindu origin, and so is frowned on by the Islamic government of Pakistan.

At Least 10 Killed in Blast in Pakistan's Lahore

"It was a fantastic event and we used to wait for it for the whole year. Now, it seemed that Basant is no more an event for the people of Punjab. We are very much disappointed," said one Punjabi woman to Pakistani news outlet Dawn.

Officials such as Pakistani MP Tariq Chaudhry support the ban, as the fun of a festival is not worth even one human life. "If some people lose their lives due to use of chemical or metallic strings then who would take the responsibility for this crime. It is really disgusting to seek pleasure at the cost of the human lives so I think the provincial government should not give permission for Basant," he told The News, another Pakistani outlet.

Gondal was killed on Monday along with at least 13 others when the Pakistani Taliban executed a suicide attack in Lahore.