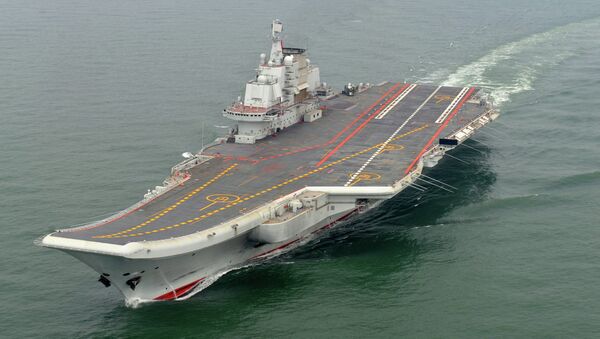 Chinese media has revealed when the country is expecting to reinforce its fleet of aircraft carriers with two more domestically built vessels: the second aircraft carrier is scheduled to be launched later this year while the third one is expected in about 2021. It also provided some details about their technical characteristics.

Chinese Aircraft Carrier Program to Make New Advances in 2017
In November 2016, Beijing declared the Soviet-era Liaoning, its sole carrier, "combat ready." Following the declaration, the ship departed on a training voyage that featured a stop on the edge of the South China Sea, at the People’s Liberation Army Navy’s (PLAN) base on Hainan Island.

The Liaoning, which got its name from the country's Liaoning Province, is in fact, the ex-Soviet aircraft carrier Varyag which was laid down as a Kuznetsov-class carrier for the Soviet navy in the 1970s, and which was only 70% completed and floating in Ukraine before being purchased by China.

In June 2011, People's Liberation Army Chief of the General Staff Chen Bingde confirmed that China was constructing its own aircraft carrier. Just a month later, in July, a senior researcher of the Academy of Military Sciences said China needed at least three aircraft carriers due to the same number of vessels possessed by its close neighbors India and Japan.

China then announced that two aircraft carriers were being built at the Jiangnan Shipyard in Shanghai. 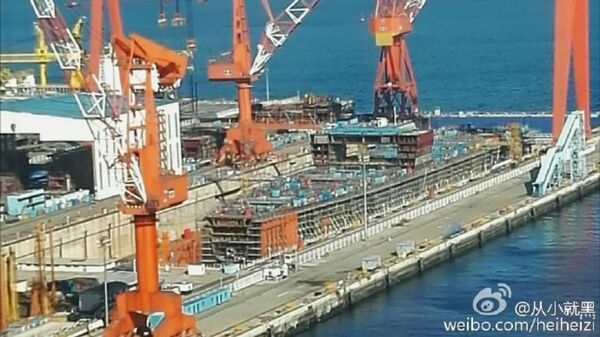 This hull under construction at Dalian Shipyard could be China's first indigenous aircraft carrier.
© Weibo/heiheizi

On Monday, the South China Morning Post revealed when the country is expecting to reinforce its fleet of aircraft carriers with two more domestically built vessels and provided some of their technical characteristics.

The second aircraft carrier, which is provisionally named Type 001A, is scheduled to be launched later this year, but it will take several more years to develop as part of a real battle group before entering full service in the navy, Li Jie, a Beijing-based military expert told the newspaper.

However Andrei Chang, founder of military magazine Kanwa Asian Defense has argued that the Type 001A was not of Chinese design but "purely a copycat" of the same Soviet-era Varyag, which was further refurbished into the Liaoning.

Li Jie though maintained that "while the appearance of the Type 001A may be ¬similar to the Liaoning, its layout, interior equipment and overall operational concept would be more advanced than the ¬Liaoning."

New Naval Power? China Expected to Have 3 Aircraft Carrier Groups in Near Future
One difference, he explained, is the Type 001’s take-off ramp slope of 12 degrees, compared with 14 ¬degrees for the Liaoning.

The 12-degree ramp would help fighters shorten their take-off distance, save fuel and increase their weapons payload while strengthening the ship’s structure, Li told the newspaper.

"There are different operational concepts between the Liaoning and Type 001A," he said.

"Based on the Varyag design, the Liaoning was designed with both weapons systems and aircraft in an equally important layout, but the Type 001A has learned from US carriers to focus on how to make aircraft on board more functional," the expert said.

He also added that certain weapons were excluded from the Type 001A platform to allow more room to park carrier-based Shenyang J-15 (carrier-based fighter aircraft). The hanger was also being expanded to allow the new carrier to carry between six and eight more J-15 fighter jets than the Liaoning.

"The control tower island on the deck was shrunk 10 per cent, which allows the deck to dock more helicopters and fixed-wing early-warning aircraft," he said, adding that four weapons sponsons, or projections, on the aft deck had been dismantled.

Beijing: Aircraft Carrier Group in South China Sea is Testing New Weapons
S-band radars with four large antennae would be installed on the top of the control tower. The system is China’s most ¬advanced and is capable of covering a 360-degree search field to scout dozens of targets in the air and at sea, the expert explained.

However the newspaper quotes Macau-based military observer Antony Wong Dong as saying that the country’s "limited production capacity for carrier-based J-15s might hinder the 001A entering full service on schedule."

"The Liaoning was designed to carry up to one aviation regiment, or 24 carrier-based fighters," he said.

"But the vessel has so far got only about 20 carrier-based J-15 because the [state-owned] Aeroengine Corporation has not yet developed a reliable replacement for the Russian-produced AL-31 models," he further told the newspaper.

"It’s likely that the Type 001A will face the same problems as the Liaoning," the expert stated.

Meanwhile, commenting on its second domestically built aircraft carrier and the third overall, the Type 002 vessel, the construction if which got underway at the Jiangnan Changxingdao shipyard in Shanghai in March 2015, naval experts said that China will not adopt highly ¬advanced electromagnetic take-off technology on it but instead rely on a conventional system.

It would be the first Chinese aircraft carrier to use this type of launch system.

"There are still some technical problems applying nuclear — propulsion to the carrier platform, so the Type 002 will still use steam catapults," the source said.

"But this is still a breakthrough compared with Liaoning and the Type 001A carrier, both of which are equipped with ski-jump ramps."

"It will [also] take a couple of years for the newest carrier to enter full service after its launch, as it takes two or three years to train carrier-based pilots," the source added.

Meanwhile, Hong Kong-based military ¬expert Liang Guoliang told the outlet that the first Type 002 carrier was expected to be launched in about 2021.

The expert also added that China planned to produce two Type 002 carriers, each with a displacement of 85,000 tonnes, which would make them the biggest Chinese carriers. The Liaoning is about 55,000 tonnes while the Type 001A will be 70,000 tonnes