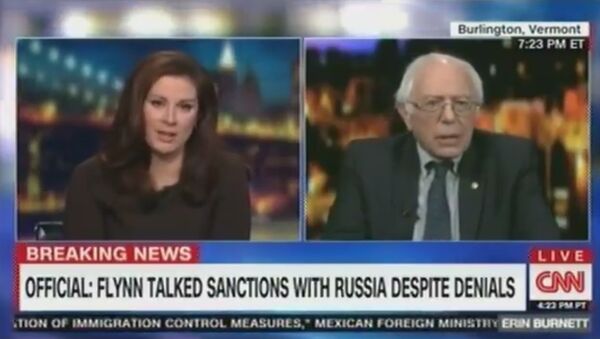 © Photo : Youtube / ThinkOutsideTheTV
Subscribe
Donald Trump has a rocky relationship with CNN. Last month he dubbed the news network 'fake news' after its false reporting over his activities in Russia several years back. Now, the President is at it again, going off on the network for cutting off Bernie Sanders' feed after the Senator jokingly used the term 'fake news' to describe CNN.

On Friday former Democratic Party presidential hopeful Bernie Sanders sat down with CNN to talk about rumors that Trump National Security Advisor Michael Flynn had privately discussed the issue of anti-Russian sanctions with the Russian ambassador to the US before Trump took office.

CNN’s Chris Cuomo Apologizes for Comparing ‘Fake News’ to the ‘N-Word’
The interview began rather ordinarily, with Sanders toeing the Democratic Party line about Russia interfering in the US elections, and accusing the Russian President of being a "thug." The senator called the accusations of Flynn meeting the Russian ambassador "troubling" and suggested that the president had some explaining to do.

Trump himself had earlier commented on the report involving Flynn by saying he hadn't seen it and knew nothing about it.

Asked by his interviewer if that was a problem, Sanders quipped: "Well I don't know. Maybe he was watching CNN fake news. What do you think?"

Following a short uncomfortable pause, Sanders quickly added "It was a joke," before his sound feed was cut. Sanders could be seen onscreen looking confused for several more seconds before his video was also cut.

Donald Trump, who famously called CNN "fake news" last month and refused to give their reporter a question at a press event after the broadcaster had helped to fuel false rumors of #GoldenShowerGate, which accused the president of hiring prostitutes at a Moscow hotel and engaging in lewd behavior, took the opportunity to slam the network again on Sunday via Twitter.

"While on FAKE NEWS @CNN, Bernie Sanders was cut off for using the term fake news to describe the network. They said technical difficulties," Trump wrote.

While on FAKE NEWS @CNN, Bernie Sanders was cut off for using the term fake news to describe the network. They said technical difficulties!

CNN went into damage control mode, its CNN Communications account saying that the president was wrong, and that the transcript showed that Sanders "was not cut off. Those are the facts."

But their own transcript clearly shows that Sanders really was cut off after joking about CNN being fake news, and returned only following a commercial break.

Bizarrely, CNN journalists Jake Tapper and Brian Stelter, who weren't even involved in the Sanders interview, felt a powerful urge to explain that Sanders was joking, and to say that Sanders was really "*criticizing Trump* for calling CNN 'fake news.'"

Untrue. Sanders was *criticizing Trump* for calling CNN "fake news." You can see for yourself, all 11 minutes, here: https://t.co/qhtlb5Wo6Q https://t.co/AcwOiNHi0j

With CNN's defenders accusing Trump of being a liar, Trump supporters rushed to post punchy comments and memes on his tweet.

@AJ The fact that @CNN responded makes them a joke.

000000
Popular comments
He was joking, that's not the point. His feed was definitely cut right after that. Somebody didn't think it was funny.
jas
12 February 2017, 19:52 GMT7
000000
It's embarrassing that CNN is so irresponsible that all it has of the POTUS is clips as spectators. And referring to Putin as a thug and a murderer is a stupid and failed talking point.
jas
12 February 2017, 19:57 GMT3
000000
Newsfeed
0
New firstOld first
loader
LIVE
Заголовок открываемого материала
Access to the chat has been blocked for violating the rules . You will be able to participate again through:∞. If you do not agree with the blocking, please use the feedback form
The discussion is closed. You can participate in the discussion within 24 hours after the publication of the article.
To participate in the discussion
log in or register
loader
Chats
Заголовок открываемого материала
Worldwide
InternationalEnglishEnglishMundoEspañolSpanish
Europe
DeutschlandDeutschGermanFranceFrançaisFrenchΕλλάδαΕλληνικάGreekItaliaItalianoItalianČeská republikaČeštinaCzechPolskaPolskiPolishСрбиjаСрпскиSerbianLatvijaLatviešuLatvianLietuvaLietuviųLithuanianMoldovaMoldoveneascăMoldavianБеларусьБеларускiBelarusian
Transcaucasia
ԱրմենիաՀայերենArmenianАҧсныАҧсышәалаAbkhazХуссар ИрыстонИронауОssetianსაქართველოქართულიGeorgianAzərbaycanАzərbaycancaAzerbaijani
Middle East
Sputnik عربيArabicArabicTürkiyeTürkçeTurkishSputnik ایرانPersianPersianSputnik افغانستانDariDari
Central Asia
ҚазақстанҚазақ тіліKazakhКыргызстанКыргызчаKyrgyzOʻzbekistonЎзбекчаUzbekТоҷикистонТоҷикӣTajik
East & Southeast Asia
Việt NamTiếng ViệtVietnamese日本日本語Japanese中国中文Chinese
South America
BrasilPortuguêsPortuguese
NewsfeedBreaking
20:13 GMTWhite House Unaware of Reports That Ex-President Bush Was Victim of Havana Syndrome
19:50 GMTInstagram CEO Testifies in US Senate on Potential Harm to Teenagers
19:44 GMTPentagon Chief Austin Rejects ‘Red Lines’ in Ukraine, Taiwan as US Draws its Own
19:01 GMTPiers Morgan Compares Joe Biden to Kim Jong-un in Column Bashing White House's Approach to Media
18:59 GMTPhotos of Ghislaine Maxwell Rubbing Jeffrey Epstein's Feet, Kissing Him Released by US Prosecutors
18:48 GMTJapanese F-35A Makes Emergency Landing During Routine Training Flight - Video
18:23 GMTPutin: Sanctions Under Pretext of US Security Attempt to Contain Russia's Development
18:03 GMTTucker Carlson Warns of Danger of ‘Hot War’ Between US and Russia Over Ukraine
18:02 GMTTrudeau: Canada Will Not Send Diplomatic Representation to China Olympics
17:56 GMT'A Verbal Agreement With Premier League Club? All False': Mancini Dismisses Man United Job Links
17:48 GMTBiden’s Empty Warning Over Putin’s Straw Man ‘Invasion’
17:42 GMTUS Reportedly Becomes Major Destination for UK's Post-Brexit Financial Services Exports
17:41 GMTIndia’s Congress Unveils 'Manifesto for Women' to Woo Voters in Uttar Pradesh
17:31 GMTInitial Sketch Found Beneath Rembrandt's 'Night Watch' - Photo
17:22 GMTIMF: Metals Demand From Clean-Energy Transition Threaten to Top Global Supply
17:16 GMTElon Musk Brands CEO 'Made Up Title,' Explains Why He Became Tesla's 'Technoking'
17:13 GMTIndian Farmers Agree to Call Off Year-Long Protest after Government Promises to Meet Demands
17:03 GMTUS Jobs Quitting Rate in October Down From Record Highs, Labour Department Says
16:40 GMTUS Targets Individuals in Kosovo, El Salvador, Serbia in New Global Magnitsky Sanctions
16:17 GMTBiden Announces Plans for NATO-Russia Meeting to Discuss Moscow's Concerns