Hundreds Protest Immigrant Raids in US for Second Day 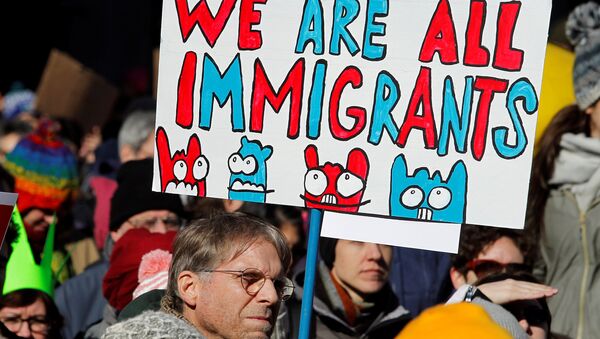 © REUTERS / Tom Mihalek
Subscribe
A second day of demonstrations for immigrant rights saw crowds gather in New York and Washington, DC, to voice anger at a week of raids by US Immigration and Customs Enforcement (ICE) and at new President Donald Trump's immigration policies in general.

Organized under the slogan "Here to Stay," groups like youth immigrant activist groups United We Dream, civic media organization Vote Latino, Human Rights Watch and others gathered to insist that immigrants and refugees remain welcome in the US. Groups like Black Lives Matter and Showing Up for Racial Justice (SURJ), which works to rally white Americans to racial justice causes, also took part.

ICE raids over the past week led to the arrests of hundreds of immigrants, with criminal records and without. Immigration officials called the raids "routine," but immigrant rights groups say they herald a return to pre-Obama policies of casting a wide net for undocumented immigrants in the United States, rather than targeting only dangerous criminals.

Reports say several hundred gathered in front of the White House to protest, with hundreds more in New York, where there were reports of arrests, and in other areas.

The New York community organization Make the Road New York confirmed that ICE raids were taking place in the city in a February 11 statement.

"The Trump administration has now doubled down on its war on our communities," the organization said. "We have confirmed ICE raids that have swept up five immigrant Staten Island residents over the past several days. These raids have the explicit purpose of tearing families apart. Our communities are understandably extremely concerned, but also resilient. We are here to stay, and we will fight back."

Hundreds rallied in New York and Los Angeles yesterday for the same cause.