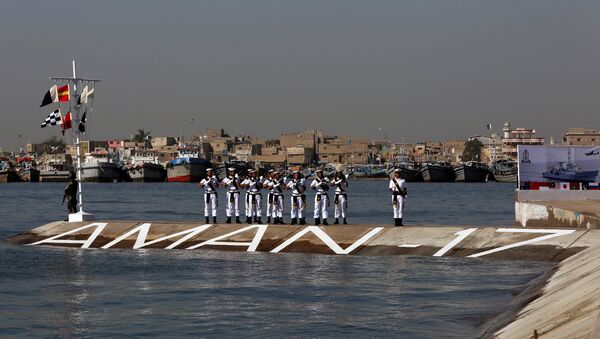 The China-Pakistan Economic Corridor (CPEC) may have a lasting impact on regional maritime activities and significantly enhance the economic importance of the Indian Ocean, the chief of the Naval Staff of the Pakistan Navy, Muhammad Zakaullah, said opening the International Maritime Conference in Karachi, Pakistan on Saturday.

Opposition to China-Pakistan Economic Corridor 'Not Directed Against Beijing'
KARACHI (Sputnik) — The International Maritime Conference is one of the main events of the Multinational Naval Exercise AMAN-2017, which is currently taking place near Pakistan's port city of Karachi in the Arabian Sea.

"The 7th International Maritime conference comes with an opportune time when China-Pakistan Economic Corridor (CPEC) and Gwadar Port have been recently operationalized, as a result of which maritime activities in the region are set to increase manifold," Zakaullah said.

He underlined that CPEC, which is a part of China's One Belt One Road (OBOR) project, is a defining development which has the potential to play a trend setting role in the region maritime landscape.

"CPEC and Gwadar Port have emerged as potential stimuli for socio-cultural integration and politico-economic development, providing much desired connectivity and excess for the entire region," he said.

India Frowns at Kashmir Portion of China-Pakistan Economic Corridor
According to the chief of the Pakistani Naval Staff, this year's conference, which has the theme "Strategic Outlook in Indian Ocean Region 2030 and Beyond-Evolving Challenges and Strategies," will lay much needed focus on the maritime economy and security as well as maritime environment in the Indian Ocean Region.

He also stressed that multifaceted challenges such as maritime terrorism, piracy, trafficking in drugs, people, firearms as well as issues related to maritime environment "cannot be addressed single-handedly by any of the nation and require a collaborative approach."

The AMAN-17 is the fifth Multinational Exercise of AMAN series, held in Pakistan since 2007. Navies of 37 countries are participating in AMAN-17, including Australia, China, Indonesia, Turkey, Russia, Sri Lanka, the United Kingdom, the Unites States and Japan. The drills are held on February 10-14 in the Arabian Sea off Karachi.