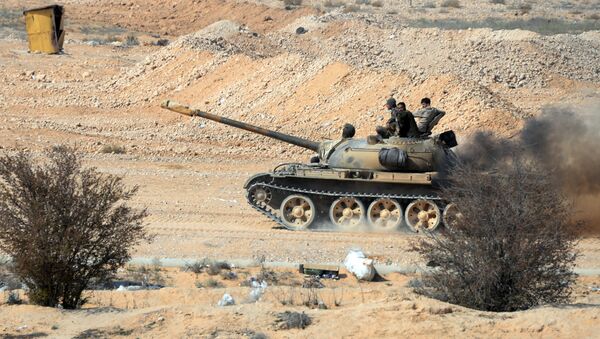 The Syrian army launched a successful operation against Daesh in the desert of Homs province. The infantry reached the outskirts of the al Hayan oil deposit, which is considered to be an important and large source of oil.

Syrian Army Regains Control Over Key Transport Junction in Homs Province
A few days ago the Syrian army launched a massive operation to strengthen its positions, which are subject to constant attacks by terrorists. The operation was aimed at securing al Tifur airport and the road between Homs and Palmyra.

Similarly, a safety zone was extended around the airport, whose radius spreads to 35 km.

Currently, the army is busy defusing mines that were installed by the terrorists to hinder the advancement of the Syrian army in the direction of oil districts.

The ultimate objective of the operation is to return the control of the oil resources and liberate the historic city of Palmyra.

Earlier, it was reported that at least 82 militants had surrendered and laid down arms to the Syrian army in central Homs province on Friday, Fars news agency reported.

The militants, who operated in and near the town of al-Holeh, surrendered at the Samalil passage.

Government officials are said to have granted pardons to the militants after seizing their arms.