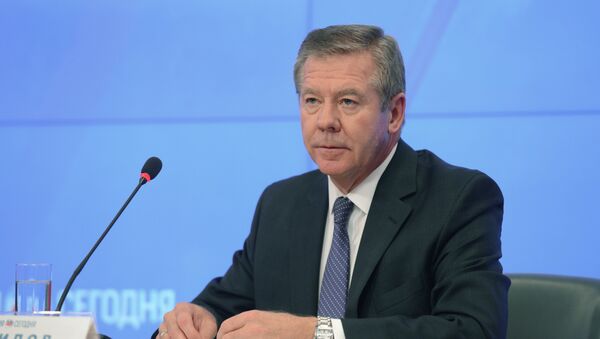 © Sputnik / Evgeni Biyatov
/
Go to the photo bank
Subscribe
Moscow thinks that it would be useful to include representatives of Damascus in the work of the International Syria Support Group (ISSG), Russian Deputy Foreign Minister Gennady Gatilov told Sputnik.

Russia Delivers Humanitarian Aid to Almost 4,000 Syrians
MOSCOW (Sputnik) — The ISSG, co-chaired by the United States and Russia, was formed in November 2015 — shortly after the beginning of the Syria peace talks — as a panel of countries seeking to end the bloodshed in Syria.

"We believe that participation of the representatives of the Syrian government in the work of these groups would be very useful from a practical point of view as they would be able to clarify the emerging issues in terms of the delivery of humanitarian assistance to the Syrian population. Unfortunately, many of them [issues] in the absence of Damascus representatives remain unaddressed," Gatilov said.

Moreover, the ISSG task forces, for humanitarian issues and the ceasefire, continue to function in Geneva.

Previously, group meetings of representatives from ISSG member countries were held weekly on Thursdays, with their outcomes summarized at press conferences.

"Weekly meetings are held within the framework of the ISSG established humanitarian task force and the ceasefire task force, during which topical issues, corresponding to the groups' responsibilities, are discussed," Gatilov said.

He added that, "these meetings do not always go smoothly, taking into account the existing differences in the approaches of different players to the settlement of the Syrian crisis, and attempts by individual members to use the platform exclusively to criticize official Damascus."

However, the deputy foreign minister noted, "a working environment is maintained, as a result of recently achieved steps in compliance with the cessation of hostilities."