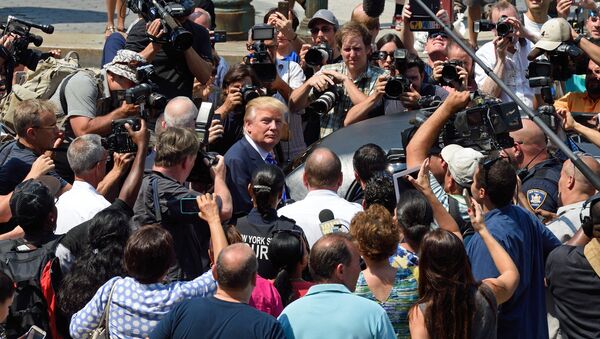 A new survey shows that the Americans trust President Donald Trump more than the news media. According to the recent findings by Emerson College, 49 percent of voters think that the Trump administration tells the truth. This is compared to 48 percent of those who trust the media.

"I think it shows that the American voters are more sophisticated that they are given credit for. They find credible neither Trump, nor the media. And that's very disturbing, but I'm not surprised by this. I think there's been a downward trend in credibility of the media for some years," Lauria said.

According to him, the quality of US media reports has significantly decreased over the last decades. In contrast to 1960-80s, when media outlets laid focus on the investigative journalism and news reporting, the modern media industry has rather turned into "infotainment," with entertainment divisions taking over the news.

"In 1960-80s, within twenty minutes there was more news given on a TV report than is given in 24 hours today by CNN and the others," the journalist said. "TV news has gone into the toilet and that is all driven by profit."

In Lauria's opinion, many media corporations report in a way which is more beneficial for them. They often "leave important facts out," release one-sided information and "people just don't buy it anymore."

Commenting on the recent US media's criticism toward Trump and on how much time it will take US journalists to come to realization that Trump is president and they can do nothing about it, Lauria said:

"Well, I think they'll come to that realization, but I don't think they'll stop criticizing him, and nor should they. I think there is valid criticism in what Trump has done. The point is they didn't criticize Obama enough."

Mainstream Media Brouhaha Over Trump's Migration Executive Order
Meanwhile, a majority of respondents, or 53 percent, said they did not trust the national media. The poll also revealed a bipartisan split on the issue, with the majority of Democrats, 69 percent saying they find news outlets truthful. Conversely, 91 percent of the Republicans believe the contrary.

The poll also asked to assess President Trump's performance which he has shown since taking the oval office earlier in January. Here the respondents appeared to be split, with 48 percent saying they approved, while 47 percent disapproved it.