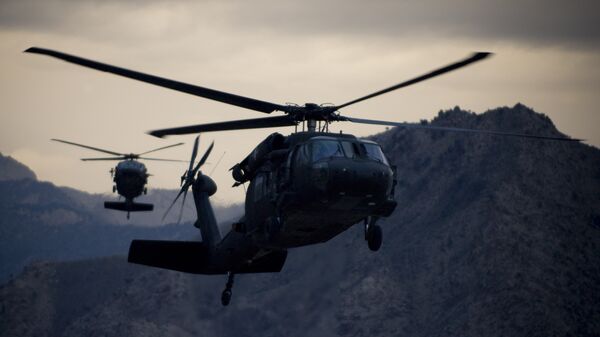 On Thursday, hundreds pieces of equipment offloaded by a US combat aviation brigade were shipped out to Germany, along with helicopters intended to beef up the Army’s air support of NATO forces.

As its nine-month rotation in Europe begins, the 10th Combat Aviation Brigade, based in Fort Drum, New York, is bringing 10 tandem-rotor Chinook and 50 Black Hawk helicopters along with roughly 2,000 troops.

This deployment comes just three weeks after the election of President Donald Trump, who vowed to improve relations with Moscow, although Russia reportedly views the military reinforcements as a sleight.

In January, Kremlin spokesperson Dmitry Peskov condemned US deployments to Poland, saying, "We consider this a threat to us. These actions threaten our interests, our security. Especially as it concerns a third party building up its military presence near our borders. It's [the US], not even a European state."

In a news release, brigade commander Col. Clair A. Gill said, "We're going to be all over Europe joining the Strong Europe team and integrating into their training plan for the next nine months," explaining that, "While an armor brigade is a very lethal force, and they're going to do some fantastic training with our partners on the ground, aviation really is what I like to call that three-dimensional problem solver for the Army, the joint force and our coalitions. We move faster than they do on the ground, and we shoot farther in some cases than some systems from the ground."

A Fort Bliss, Texas, aviation battalion will be adding 24 Apache attack helicopters and 400 troops to the 10th CAB detachment. Germany will serve as headquarters for the combined units and aircraft, and troops will be coursing through Romania, the Baltics and Poland.

The next major movement of Army troops in Europe will come in a few weeks, when the 2nd Cavalry Regiment, based in Vilseck, Germany, makes their way to Poland where they will operate as an "enhanced forward presence" for NATO. A part of northeastern Poland will house a cavalry battalion not far from Russia’s Kaliningrad.

Approved by NATO heads of state in July 2016, these rotations signal the most significant eastward military movement since the end of the Cold War.

Trump has been vocal about wanting to improve ties with Russia, asking during a summer campaign speech, "If we could actually be friendly with Russia, wouldn’t that be a good thing?" and stating during a Sunday interview with pundit Bill O’Reilly, "it’s better to get along with Russia than not."