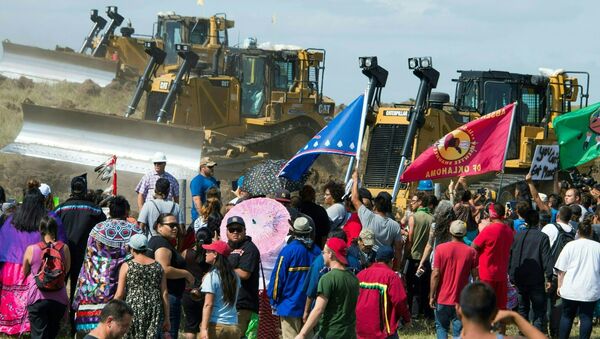 WASHINGTON (Sputnik) — On Wednesday, the US Army Corps of Engineers granted easement needed to immediately resume work on the final phase of the $3.7 billion pipeline, which was in limbo pending an environmental impact statement since December.

"The tribe requests that a temporary restraining order preventing drilling under Lake Oahe be issued immediately with a hearing to be held on this matter at the Court’s earliest convenience," the court documents stated on Thursday.

The tribe also requested a preliminary injunction to prevent drilling, according to the court documents.

A hearing on the tribe’s request to temporarily block construction of the Dakota Access pipeline is scheduled on February 13.

Sioux Tribe: Trump Exhibits ‘Distorted Sense of Reality’
The documents noted the granting of the easement violates the tribe’s and its members’ Constitutional rights under the Religious Freedom Restoration Act.

The tribe has cited the Treaty of Fort Laramie with Sioux of 1851 as the basis for arguing that construction is not on US federally-owned land, but on designated land belonging to the Great Sioux Nation.