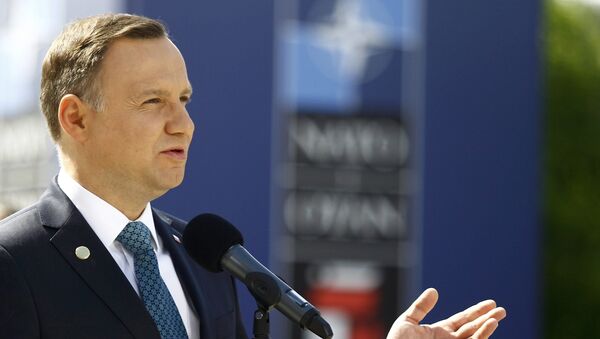 “We will do everything so that the relations between Poland and the United States, as well as transatlantic relations, i.e. between the United States and the European Union, develop as good as possible. There is a huge field for actions, especially now that the new US President is starting his work,” Duda said at a press conference in Sejm commenting on the Foreign Ministry 2017 task report.

Duda added that strengthening cooperation with Washington was a key task for the Polish diplomacy and for him personally as the United States, according to the Polish official, was the main world power from the economic and military points of view, as well as the most important partner within NATO and “the guarantor of world security”.

Poland is now boosting its armed forces as NATO increases its presence in Eastern European countries neighboring Russia since 2014, using Moscow’s alleged interference in the Ukrainian conflict as a pretext.

000000
Popular comments
There is nothing wrong with Poland reaching out to the US with now Trump as president. He keeps his word no matter what the outcome. Then if he takes a hit he will revise his tactics to help the working Americans not the freeloaders of society. So it's a new day and Poland can keep an open dialogue with the US and see where it goes from here.