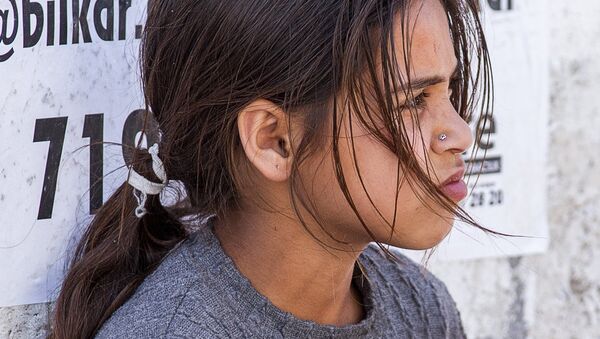 © Flickr / Mehmet Bilgin
Subscribe
"Saddened, shocked," "shameful" and "catastrophic" - these are just some of the words uttered by British politicians, campaigners and clergy after the UK government decided to end a scheme allowing vulnerable young child refugees into Britain.

"I feel chilled to the core that our government could take such a catastrophic decision like this," Dr. Alison Phipps, academic and activist with Glasgow Refugee, Asylum and Migration Network told Sputnik.

​Ministers have announced that the British government will stop allowing unaccompanied child refugees into the country once the quota reaches 350.

"Chilled that such a decision puts more vulnerable children waiting in hope in an even more doubtful and anxious situation," Dr. Phipps said, "especially after so much work from politicians and NGOs campaigning for the amendment."

The British government cites fears it would encourage people traffickers, fears which are "mythical," according to Dr. Phipps.

"Incentives are mythical, it's extremely difficult to come through our borders or pass the paperwork necessary to be welcomed as a refugee in this country," Dr Phipps told Sputnik.

Rights Group Urges UK, France to Help Migrant Children Reunite With UK Relatives
"These are children reaching the age of puberty, a time in their life when everything is changing, they need to find people they can trust but they haven't been able to form that sense of understanding, so they're in a very vulnerable situation," she added.

The Dubs amendment was introduced by Labour peer Lord Dubs, to try and help the estimated 90,000 unaccompanied child refugees stuck in Europe.

"Lord Dubs was himself a child refugee before the Second World War. He knows what it's like," Sarah Crowe, Unicef spokesperson told Sputnik.

Lord Dubs says Home Office decision to close down scheme to bring lone child refugees to UK is "shutting the door on the most vulnerable."

"Behind every number there is a vulnerable young person languishing in grief who has a legitimate reason to be reunited with families in the UK. They need help now and the UK has a long and rich tradition helping refugees and we hope it will continue," Ms. Crowe said.

Our Exec Director Tony Lake on why everyone must be there #foreverychild. RT if you agree. pic.twitter.com/4V3P7l3GP8

The government had initially committed to welcoming 3,000 lone refugee children stuck in Europe into Britain — but have reneged on the commitment.

"We need to see these children as children, not refugees or migrants. They're fleeing war and persecution, they're stranded, it's not their own fault," Ms. Crowe told Sputnik.

Britain's Home Secretary Amber Rudd, said the government's decision to end the scheme was made after France raised concerns that it could encourage more children to try and reach Europe:

"I am clear that when working with my French counterparts, they do not want us to indefinitely continue to accept children under the Dubs amendment because they specify, and I agree with them, that it acts as a draw.

"It acts as a pull. It encourages the people traffickers," Amber Rudd said.

An incentive described as "mythical" by Alison Phipps, who has worked at the coalface with child refugees in "huts, containers and camps" across Europe.

"I believe in arbitrarily closing down the scheme, without any good reason for doing so, the government is in breach of its own commitments," Lord Dubs told the House of Lords.

Just 350 of a possible 3,000 unaccompanied child refugees have been brought into Britain from Europe under the Dubs amendment scheme.

000000
Popular comments
A couple of multibillionaires could take those 90,000 children and give them a decent home in a brand new city staffed by sincere non-child abusing angels without even coming close the corrupt and degenerate Europe. And they wouldn't even feel the money pinch. Unfortunately, the corrupt and degenerate Europe is how the multibillionaires make their money. And they are just as corrupt and degenerate, until they prove otherwise.
dvdgrg09
9 February 2017, 20:10 GMT
000000
Newsfeed
0
New firstOld first
loader
LIVE
Заголовок открываемого материала
Access to the chat has been blocked for violating the rules . You will be able to participate again through:∞. If you do not agree with the blocking, please use the feedback form
The discussion is closed. You can participate in the discussion within 24 hours after the publication of the article.
To participate in the discussion
log in or register
loader
Chats
Заголовок открываемого материала
Worldwide
InternationalEnglishEnglishMundoEspañolSpanish
Europe
DeutschlandDeutschGermanFranceFrançaisFrenchΕλλάδαΕλληνικάGreekItaliaItalianoItalianČeská republikaČeštinaCzechPolskaPolskiPolishСрбиjаСрпскиSerbianLatvijaLatviešuLatvianLietuvaLietuviųLithuanianMoldovaMoldoveneascăMoldavianБеларусьБеларускiBelarusian
Transcaucasia
ԱրմենիաՀայերենArmenianАҧсныАҧсышәалаAbkhazХуссар ИрыстонИронауОssetianსაქართველოქართულიGeorgianAzərbaycanАzərbaycancaAzerbaijani
Middle East
Sputnik عربيArabicArabicTürkiyeTürkçeTurkishSputnik ایرانPersianPersianSputnik افغانستانDariDari
Central Asia
ҚазақстанҚазақ тіліKazakhКыргызстанКыргызчаKyrgyzOʻzbekistonЎзбекчаUzbekТоҷикистонТоҷикӣTajik
East & Southeast Asia
Việt NamTiếng ViệtVietnamese日本日本語Japanese中国中文Chinese
South America
BrasilPortuguêsPortuguese
NewsfeedBreaking
01:58 GMT'Mindless': Netizens Fire Back After US Rep Posts Pro-Gun Christmas Pic Days After Michigan Killings
01:51 GMTRussia’s Sovereign Right to Deploy Troops on National Territory Poses No Threat - Embassy
00:04 GMTMagnitude 6.0 Earthquake Rocks Indonesia - EMSC
YesterdayPentagon Chief Says US Ready to Support Taiwan in Face of China’s Military Rise
YesterdayAmericans' Confidence in US Military Continues Its Decline, Survey Shows
YesterdayCNN Fires Chris Cuomo Over His Efforts to Help Brother With Sexual Harassment Claims
YesterdayUS Democracy in Trouble? Half of Young Americans Polled Agree
YesterdaySuper-Union Leader Explains Donation Cut-Off to Cash-Strapped Labour Party
YesterdayFlight From Tel Aviv to Moscow Changed Flight Level Due to NATO Spy Plane - Air Authority
YesterdayPolice: Parents of Suspected Michigan School Shooter Had Help Hiding in Detroit Warehouse
YesterdayKiev Seizure, Donbas Advance: German Tabloid Sources Fantasize Russian Invasion of Ukraine
YesterdayTurkish Authorities Uncover Explosive Device on Police Car Assigned to Erdogan Rally
YesterdayBlast Heard Over Iran's Natanz, Where Nuclear Facility Located
YesterdaySouth African Province at Centre of Omicron COVID Variant Sees More Children in Hospital
YesterdayPolish Prime Minister Orders Cybesecurity Alert Ahead of UN Forum
YesterdayGreek Prime Minister Assures Vatican That Condition of Migrants in Greece Improved
YesterdayBlinken: Any Move by China to Invade Taiwan Will Result in ‘Terrible Consequences’
Yesterday‘Killer Robots’ Threat Persists as US Unwilling to Discuss Ban on Lethal Autonomous Weapons Systems
YesterdayLionel Messi Reveals He 'Never' Wanted to Become Best Football Player
YesterdayPutin, Biden Will Hold a Video Call on Tuesday Evening