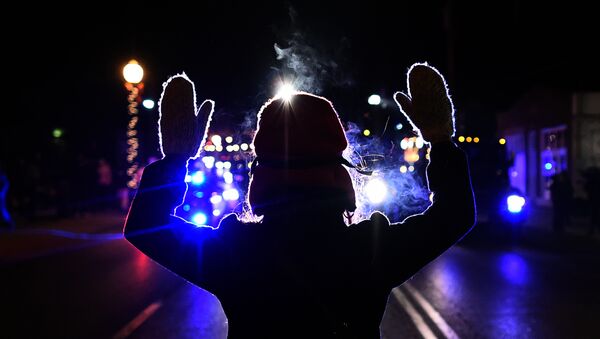 © AFP 2021 / JEWEL SAMAD
Subscribe
A new study shows that African American victims of police shootings are twice as likely to be unarmed as white victims. As part of an effort to understand the role of prejudice and race in deadly police confrontations, a group of researchers, led by the University of Louisville, Kentucky, analyzed information on 990 police killings since 2015.

University of Louisville assistant criminal-justice professor Justin Nix told the International Business Times that, "Black suspects were more than twice as likely as white suspects to have been unarmed…And that's after we controlled for things like mental illness, threat level, age, etc."

Nix added, "If you can accept that assumption, then we showed that the citizen's race is predictive of those threat perception failures, which we think is evidence of bias, and presumably implicit bias, although it's impossible to tell."

The professor explained that a police shooting of an unarmed person is not likely to occur because of conscious racism, but rather due to a miscalculation of a threat, heightened by a latent racial bias.

According to the study, "The results indicated civilians from 'other' minority groups were significantly more likely than Whites to have not been attacking the officer(s) or other civilians and that Black civilians were more than twice as likely as White civilians to have been unarmed."

Jack Glaser, a public policy professor at UC Berkeley, offered, "I think what this is pointing to is that, when officers are in those very threatening situations, it’s a lot harder to compensate for bias…They are terrified and they are influenced relatively more by lower-level, spontaneous processes."

The study, published Wednesday in the Criminology and Public Policy journal, does not account for all shootings in a given time frame, only fatal shootings. Nix acknowledged that issues arose die to the small sample size used in the study.

The numbers used in the research, sourced from a Washington Post database, shrink, if limited to unarmed victims only. Only 93 victims of police shootings in 2015 were unarmed. The vast majority of police shooting victims were detailed as possessing some kind of weapon.

After a rash of high-profile police killings of African Americans, President Barack Obama called for a Task Force on 21st Century Policing, which recommended policy, oversight, training, education, and community engagement, as ways to help bridge the divide between police and the communities that they are sworn to protect.