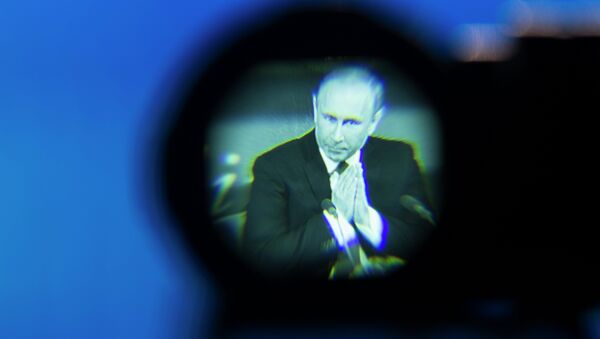 © AP Photo / Pavel Golovkin
Subscribe
International
India
Africa
Broadcasting Board of Governors CEO and Director John Lansing says that the United States and Russia are not in an information war.

WASHINGTON (Sputnik) — The United States and Russia are not in an information war, Broadcasting Board of Governors CEO and Director John Lansing told Sputnik.

“I wouldn’t call it an information war,” Lansing said on Tuesday. “I would say that our interest is in US international media being professional, independent, and objective, and truth telling in its approach.”

The US local media reported on Monday that US policymakers are preparing to wage an information war against Russia through the Global Engagement Center (GEC), initially created to fight Islamic State (Daesh) propaganda.

World
'Close Calls' Between Russian, US Jets Part of Obama's 'Information War'
According to the news website, legislation on Russian sanctions, proposed last month by senators Ben Cardin and John McCain will give an additional $100 million for the GEC to support the information warfare research as well as Russian-language journalism.

Commenting on what should and will the main efforts of the United States be, Lansing said, “To tell the truth, to do truthful, factual, independent, professional journalism.”

“That’s what we’ve been doing for 75 years and now we’re expanding our effort in the Russian language but our mission is the same,” Lansing claimed.

When asked whether he believes that the United States should counter Russian propaganda, the Director said, “I don’t believe we should counter anything, I think we should do professional, independent journalism.”

Former US Assistant Secretary of State for European Affairs Victoria Nuland said in June that since 2014, Washington spent $100 million to counter what it calls Russian propaganda, from BBG’s Russian programming to support for civil society, independent media, journalists training, including outside Russia.

When asked if the BBG intends to request a funding increase, Lansing stated, “As much funding as we can get to do good, professional, objective journalism we will seek to get.”

“It’s too premature to discuss [specific amounts], we still are waiting to get off a continuing resolution for the year that we’re in. There’s been no discussion about next year,” he added.

US authorities have repeatedly accused Russia of using its media outlets, including RT and the Sputnik news agency, to influence the outcome of November's US presidential election. The claims took up a significant part of a recent US intelligence report published amid the Democratic Party hacking scandal. The report claimed Russia attempted to swing the election in favor of Trump. Trump said the election outcome was not affected by anything related to Russia, while Russia dismissed the claims as absurd.

World
UK's RT Clampdown Could Echo US 'Information War' Against Russia
The outbreak of the Ukrainian crisis in 2014 led to a deterioration in relations between the West and Russia, with Western media alleging Russian involvement in the conflict. Russia repeatedly denied the allegations and asked for proof, which the West has not been able to provide.

In May 2015, the Russian Foreign Ministry stated that the West had imposed an information blockade on the events in Ukraine, and urged international observers to provide factual assessments on the issue.