Political Scandals as the Main Tool of Recent Electoral Campaigns 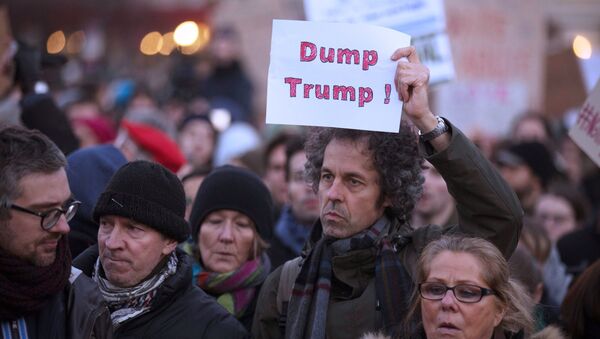 Electoral campaigns were always accompanied by scandals since the day the world saw the first election. However, while previously compromising materials were used by campaign masterminds as an additional tool, today their influence on the results of elections is rapidly growing.

US Presidential Election Amid Political Scandals

The recent presidential race in the United States was engulfed in scandals. After emails of Democrat hopeful Hillary Clinton leaked and were made public, many in the US could not help but wonder if she was a person responsible enough to lead the country.

Clinton’s Team Slams FBI Director for 'Break in Protocol' Over Email Scandal
Hillary Clinton’s emails published by the whistleblowing website WikiLeaks were a motive for a probe by the Federal Bureau of Investigation (FBI). Clinton’s electoral office commented that the investigation was one of the main reasons behind her defeat in the election.

Hillary’s main opponent Donald Trump has been engulfed in scandals throughout the electoral campaign and even after his inauguration as US President. The Washington Post published an audio record of a conversation with Trump from 2005, in which the billionaire made a series of misogynistic remarks.

Moreover, the mainstream media avidly discussed tax-evasion allegations against Trump. Finally, CNN and BuzzFeed published a fake dossier on Trump, allegedly containing compromising materials. The document was soon rebuffed by British intelligence, and Trump and his team have refused to speak to CNN since then.

President Macron? French Election Blown Apart as Scandals Hit Fillon, Le Pen
Long considered to be the favorite, Francois Fillon from the Republican party has been hardest hit, with the conservative leader the subject of an investigation amid allegations his wife and children received around $1.07 million in public funds for alleged "fake jobs" while working as parliamentary aides and assistants.

As for his rival Marine Le Pen, the leader of the National Front party, the European Union’s anti-fraud watchdog, has demanded her pay back $365,000 in European Union allowances, accusing her of breaking EU rules by using the institution's money to pay for two assistants who were carrying out non-parliamentary work.

Moreover, last week, WikiLeaks said on Twitter it had thousands of documents mentioning not only Fillon and Le Pen, but also independent candidate Emmanuel Macron.

While information attacks are still used to damage the reputation of political opponents, the role of media in the electoral process has been considerably revised.

When such reliable media outlets as the Washington Post, the New York Times or CNN are involved in discussing such information this make the leak even more credible.

"This is very important. This has a significant influence on the final results of a vote," Ventrenko added.

The use of leaked compromising information is a routine for electoral campaigns around the world, according to Igor Bunin, director of the Center for Political Technologies.

Media and political experts note that the role of media in political scandals has been on the rise in the recent years. However, it is unclear whether this will be a long-standing trend or not.

According to Vetrenko, while the electorate’s response to such information wars is decreasing, media outlets are increasing their involvement in the process. This is the reason why media has become such a powerful tool in electoral campaigns.

"Compromising materials and scandals are usually a certain message to the establishment, rather than to an average voter," she pointed out.

The expert also explained that non-compromising political technologies do not rely on the classic political division into the left, the right and the centrist. Ideologies are not a factor in major scandals which could influence the results of a vote.

As for Europe parties, according to Vetrenko, they are currently in a certain crisis and have "vague ideologies."

According to Bunin, in current political reality, ideologies and candidate’s electoral programs are much less important than "skeletons in their closets."

"Even now we’re witnessing instability in the French presidential race. Alain Juppe was the leader, then Fillon, but he has been hit too. It’s easy to destabilize the system. It’s better to hide all your skeletons. Everyone can be compromised," Bunin concluded.