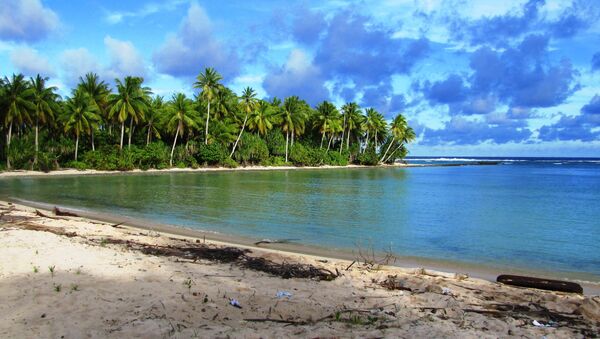 © Flickr / KevGuy4101
Subscribe
Wouldn’t it be cool to create your own empire? Like a phoenix rising from the ashes, the new Russian Empire will be resurrected on three remote islands of Kiribati. At least, that’s what ex-deputy of the Russian State Duma Anton Bakov has in mind.

Russian Empire in Portraits: Different People Captured by American Explorer
The Romanov Empire will arise again in the Pacific islands, one hundred years after it was overthrown by the liberal February Revolution. Russian millionaire and founder of the Russian Monarchist Party Anton Bakov aims to create the "alternative Russia" on the uninhabited Malden, Starbuck and Caroline (commonly called Millennium) islands of the Republic of Kiribati.

Negotiations with the government of the republic on the land lease have already reached the final stage, Bakov told Sputnik. Russians who are tired of democracy and harsh winters will have a chance to move somewhere a bit more tropical. 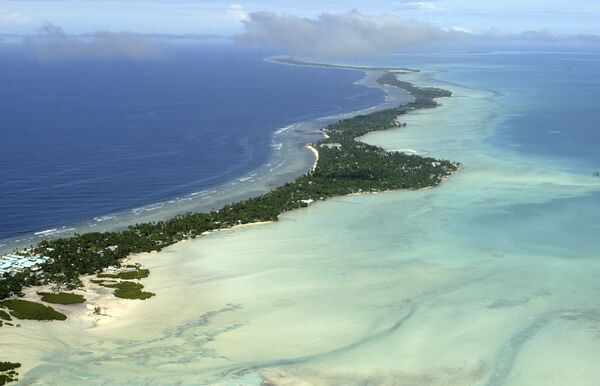 This idea came to the millionaire's mind a long time ago. For years he searched for a place to restore the Russian monarchy. Montenegro and the Cook Islands in Polynesia were considered as options; however, talks with the states' representatives proved to be fruitless. But in Kiribati, the businessman's proposal was taken seriously.

Happy New 1917! History Buffs Bring the Past to Life in Latest Twitter Craze
"The world still has a lot of barbarism and nationalism. And my experience in diplomacy is very small. Herewith, we have offers from three other UN member states. Of course, Kiribati is at the top of the list," Bakov told Sputnik.

Back in 2011, the businessman created a micronation called "the Russian Empire," and the current project inherits this idea.

"Alas, the micronation has quickly outgrown itself. Things got too serious after registration of the Monarchist Party and acquisition of the heir to the throne. At first, it was converted into a state-like formation, the Imperial Throne, similar to the Order of Malta, and then it transformed into the Romanov Empire, which we consider to place on those three islands," the businessman said.

"Kiribati is our choice and our political and commercial project. There is even a connection between Kiribati and Russia — it is Vostok Island, which was discovered by Russian sailors. But it is too small," he continued.

According to Bakov, the delegation's first visit to Kiribati took place back in September 2015.

"I am, personally, here for the fourth time, and spent 10 weeks here in total. I've met with the President and the Vice President many times, and I'm familiar with all the ministers, half the members of parliament, a bishop, mayors, foreign ambassadors and businessmen. I hope that we have already entered the final lap in terms of the land lease agreement. But I must admit that no one is in a hurry here except me. Well, that's what their culture is," the politician noted. 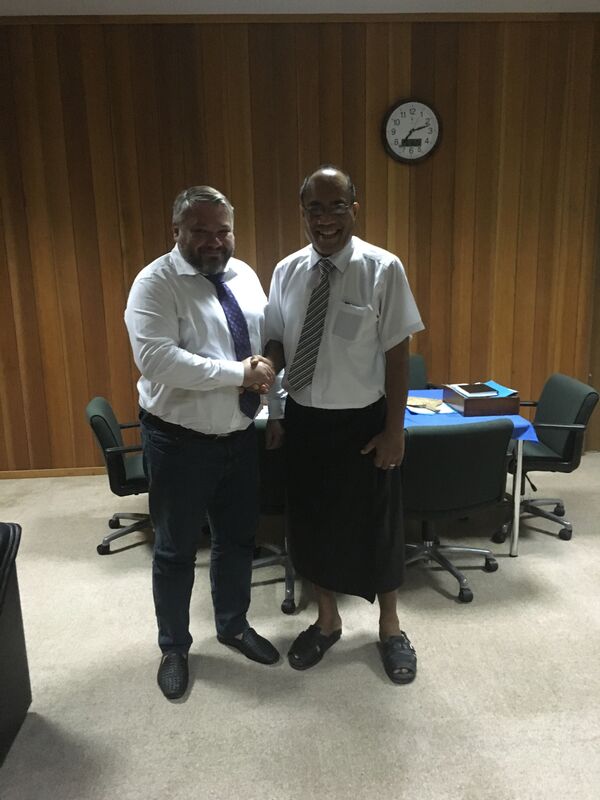 He didn't reveal the strategy of the new state yet, explaining that this will happen after the negotiations. However, Bakov stressed that he supports a demilitarized and neutral status of the territory. Who will be living in the country also remains unknown.

"It is too hot for the Russians at the equator, but Russian is expected to be an official language there. We will see how many Russians will come to live here," Bakov added.

The businessman plans to create the necessary infrastructure for business and tourism. He is ready to invest about 350 million dollars in Kiribati's economy, and it will be the largest investment in the history of the republic.

However, not all monarchists support Bakov's enthusiasm. The opponents of the idea are mostly ​​those who refused to join his party, he concluded.

000000
Popular comments
Russian Empire can ONLY be fruitful in Russia. It could be revived in Russia. BUT with limited powers. Like say, send the personnel to read the Kremlin decrees loud. Inspect constructions. Serve as tourism attraction. The FIRST is that RUSSIA is ONLY part of Russia with is registered as a sovereign country. Russia could debate, sue , order cease and desist. Or go arrest them ALL> Including this CLOWNS. Why using the name RUSSIA. Russia is NOT Russia alone anymore. Russia belongs to CIS/EEU unions. As main unions. They have courts that are becoming of all kinds. An int court of arbitration is due at CIS/EEU. And a new UNION where both are consolidated with no passports. Where anyone can cross the lines just with a new ID for both unions. And a birth certificate of the state born. This could even bring a drivers license from the union. Or each state can drive all over. the coups were part of CLINTON , as MANURE BAG of State Dept, when she said, we will make sure you NEVER reform the Soviet Union space. Or anything as IS. THAT'S why Russia is the ENEMY.
cast235
8 February 2017, 18:37 GMT
000000
I'm not russian but i'm interested. How i join?
Epicuro
8 February 2017, 18:48 GMT
000000
Newsfeed
0
New firstOld first
loader
LIVE
Заголовок открываемого материала
Access to the chat has been blocked for violating the rules . You will be able to participate again through:∞. If you do not agree with the blocking, please use the feedback form
The discussion is closed. You can participate in the discussion within 24 hours after the publication of the article.
To participate in the discussion
log in or register
loader
Chats
Заголовок открываемого материала
Worldwide
InternationalEnglishEnglishMundoEspañolSpanish
Europe
DeutschlandDeutschGermanFranceFrançaisFrenchΕλλάδαΕλληνικάGreekItaliaItalianoItalianČeská republikaČeštinaCzechPolskaPolskiPolishСрбиjаСрпскиSerbianLatvijaLatviešuLatvianLietuvaLietuviųLithuanianMoldovaMoldoveneascăMoldavianБеларусьБеларускiBelarusian
Transcaucasia
ԱրմենիաՀայերենArmenianАҧсныАҧсышәалаAbkhazХуссар ИрыстонИронауОssetianსაქართველოქართულიGeorgianAzərbaycanАzərbaycancaAzerbaijani
Middle East
Sputnik عربيArabicArabicTürkiyeTürkçeTurkishSputnik ایرانPersianPersianSputnik افغانستانDariDari
Central Asia
ҚазақстанҚазақ тіліKazakhКыргызстанКыргызчаKyrgyzOʻzbekistonЎзбекчаUzbekТоҷикистонТоҷикӣTajik
East & Southeast Asia
Việt NamTiếng ViệtVietnamese日本日本語Japanese俄罗斯卫星通讯社中文（简体）Chinese (simplified)俄罗斯卫星通讯社中文（繁体）Chinese (traditional)
South America
BrasilPortuguêsPortuguese
NewsfeedBreaking
10:04 GMTFrench Armed Forces Confirm One Soldier Killed in Clashes in Mali
09:55 GMTEight Dead After Car Bomb Explodes Near Presidential Palace in Somalia, Reports Suggest
09:17 GMTMan Utd Manager 'Wouldn't Be Surprised' If Cristiano Ronaldo Still Played Football When He's 40
09:16 GMTTwo People Killed, 6 Injured in Explosion in Eastern Afghanistan, Source Says
08:46 GMT'Indian Press is Much Better Behaved': Biden Takes a Jibe at US Media During Meeting With Modi
08:24 GMTFBI Confirms Probe Into Alleged Attack on Female US Service Member by Afghan Evacuees at Fort Bliss
08:12 GMTOverprotected: Britney Spears' Father Monitored Singers Texts and Calls, New Documentary Says
08:09 GMTCanadian Catholic Church Apologises to Indigenous People for Abuse in Residential Schools
07:38 GMTWomen in Afghanistan Loved Fashion Until Taliban Took Over
07:22 GMT'Can't Get This to Function at All': 'Confused' Joe Biden Suffers Mic Malfunction at Quad Summit
07:19 GMTEuropean States to Remain US 'Underlings' Without Wake-Up Call After Paris Humiliated
07:18 GMTChina Warns US Will 'Dump' India, Australia, and Japan as Four Nations Convene for Quad Summit
07:14 GMT5.8-Magnitude Earthquake Strikes Ocean Off South Africa, USGS Says
07:03 GMTCNN Anchor Chris Cuomo Mum on Sexual Harassment Allegations Against Him
06:51 GMTUK Labour Party in Hot Water for Inviting Huawei to Conference
06:40 GMTBiden's National Security Adviser May Be Guilty of Perjury Over Clinton Campaign's Russiagate Plot
06:33 GMTBoris Johnson 'Ready to Give Visas to 5,000 Foreign Truckers' Amid UK's HGV Driver Shortage Crisis
05:04 GMT'War Criminal': Watch Crowd Boo Hillary Clinton as She Accepts Queen's University Chancellorship
05:00 GMT'Agroexpress' to Offer Exporters Online Shipment Applications
04:37 GMTPakistani Prime Minister Calls for International Support for Taliban-led Afghan Government