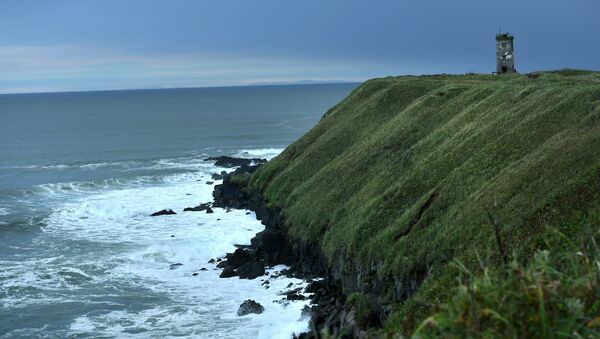 © Sputnik / Ekaterina Chesnokova
/
Go to the photo bank
Subscribe
On February 7, when Japan observes Northern Territories Day, Tokyo hosted the first meeting of the Interdepartmental council on cooperation with Russia on the Kuril Islands.

Japan Forms Interdepartmental Council on Cooperation With Russia on Kurils
The body is headed by Foreign Minister Fumio Kishida. The council also includes Economic, Trade and Industry Minister Hiroshige Seko, who is in charge of developing economic cooperation with Russia. Representatives of the Finance Ministry, Agriculture, Forestry and Fisheries Ministry, Health, Labour, and Welfare Ministry were also included in the council.

"I would like to ask all interested ministries to start consideration of joint economic projects with Russia, including in fishery, tourism, healthcare and environment protection. Those projects should be economically advantageous for both Japan and Russia," Kishida said opening the meeting.

According to Seko, Russia-Japan joint economic projects on the South Kuril Islands will be based on an eight-point plan proposed by Japanese Prime Minister Shinzo Abe during his visit to Russia last May.

Japan to Continue Talks With Russia on Southern Kuril Islands – Foreign Minister
A decision on joint economic activities on the Kuril Islands was made during Russian President Vladimir Putin’s visit to Japan in December. The visit resulted in a package of 12 interstate agreements and 68 commercial projects. Tokyo hopes that they would help overcome the deadlock over the Kuril Island territorial dispute.

The dispute over the South Kuril Islands has remained unresolved since the end of WWII.  Japan and Russia have never signed a permanent peace treaty after World War II due to a disagreement over four islands, which Russia calls the Southern Kurils and Japan the Northern Territories. The disputed islands, located in the Sea of Okhotsk, were claimed by Soviet forces at the end of the war.

"Consultations on joint economic activities will be a major positive step towards a peace agreement. The fact that for the first time in 71 years Japan is involved in developing the four islets is very important," Kishida said.

Russia-Japan economic projects on the Kuril Islands should be considered in a political context, according to Taisuke Abiru, a specialist in Russian politics and expert of the Valdai international discussion club.

Putin's Visit to Japan Strengthens Ties, Leaves Uncertainty Over Kuril Islands
The first cooperation talks between Moscow and Tokyo are scheduled for March. In late-April, Abe will visit Russia and in September he will attend the Eastern Economic Forum in Vladivostok.

"There are two approaches to organize joint economic activities. The first one is Russian. Russian wants to designate the priority projects and create the legal basis for their implementation. The second, Japanese, approach is that an agreement on economic activities is expected to help resolve the Kuril problem and sign a peace treaty," Abiru told RIA Novosti.

Moscow agrees that joint economic projects can be the key to a peaceful agreement. At the same time, Russia is not inclined to connect such cooperation to the settlement of the territorial dispute.

"We’re not talking about some exchange or some sale, we are talking about finding a solution where neither of the parties would feel defeated or a loser," Putin told Bloomberg, prior to his talks with Abe in September.

Despite the political differences, both Russia and Japan are resolved to develop joint economic projects in the region.

"The most promising area of cooperation is the fishing industry, including fish farming. Japan has significant experience in the field. Other advantageous areas of cooperation are healthcare and tourism," Abiru pointed out.

Sakhalin Preparing Plan For Kuril Islands Joint Economic Activity With Japan
Japan has a number of advanced technologies enabling the advantageous use of small islet territories, according to Valery Mironov, deputy head of the Institute for Development, at the Russian Higher School of Economics.

According to the expert, tourism could be the priority field of economic cooperation between Russia and Japan.

"Tokyo hopes that an increasing number of tourists will start travelling there. There will be a lot of those willing to see the Northern Territories. So, they will need infrastructure, including hotels and roads," Mironov said.

The assumption was echoed by Anatoly Koshkin, a professor at the Institute for Eastern Countries. According to him, it would be a mistake to industrialize the region and the unique islands should be first of all preserved as a national park.

"No large factories should be built on the South Kurils. Infrastructure should be developed there, first of all for tourists – hotels, recreational centers and thermal resorts," Koshkin told RIA Novosti.

He added that Russia and Japan may also cooperate in fishery and developing healthcare infrastructure on the islands.

Russia Has the Right to Defend Kurils, Japan Has the Right to Have a Voice
Both countries are interested in joint projects on the Kuril Islands, since Russia wants to develop its territories and Japan looks for new investment destinations.

However, Russia and Japan need to resolve a serious problem regarding jurisdiction in the area. Tokyo wants Japanese companies and nationals to work on the islands in accordance with Japanese laws. Japan considered the South Kuril Islands as its sovereign territories and does not recognize Russia’s sovereignty.

As a compromise, Tokyo may consider a package of laws specially worked out for the islands. However, this idea is opposed by Moscow.

"A special law code would mean that Russia recognizes the extraterritorial status of the islands. This contradicts the Russian constitution," Koshkin pointed out.

000000
Popular comments
My only question is, ALL is in RUSSIAN LANDS.. NOTHING about what Russia gets.8 point plans to exploit Russia's lands and fishing industries. Where Russia gets, a PEACE PLAN? REALLY? Is Gorbachev behind this? And the INEPT Ex EXXON CEO ,DUMB saying that Russia men are HARD businessmen. I'll fire them ALL next morning. I mean , WHAT Russia gets? JAPAN is against Russia and is sanctioning Russia. Is against CHINA running campaign to end all China trade in AFRICA. THIS is Russia's enemy. Perhaps next Russian movie should be tittles, sleeping with the enemy. Then VISA free to Kurils for all? ' What's wrong with Russia? Something is extremely wrong. ANd next president after Putin may say, there is NOT issue, and IF JAPAN sniff, all is over , faster than it began. I don't know. But JAPAN wants too much, and offer NOTHING!! And even sanctions in place.. And helping KIEV kill civilians.
cast235
8 February 2017, 17:57 GMT
000000
Newsfeed
0
New firstOld first
loader
LIVE
Заголовок открываемого материала
Access to the chat has been blocked for violating the rules . You will be able to participate again through:∞. If you do not agree with the blocking, please use the feedback form
The discussion is closed. You can participate in the discussion within 24 hours after the publication of the article.
To participate in the discussion
log in or register
loader
Chats
Заголовок открываемого материала
Worldwide
InternationalEnglishEnglishMundoEspañolSpanish
Europe
DeutschlandDeutschGermanFranceFrançaisFrenchΕλλάδαΕλληνικάGreekItaliaItalianoItalianČeská republikaČeštinaCzechPolskaPolskiPolishСрбиjаСрпскиSerbianLatvijaLatviešuLatvianLietuvaLietuviųLithuanianMoldovaMoldoveneascăMoldavianБеларусьБеларускiBelarusian
Transcaucasia
ԱրմենիաՀայերենArmenianАҧсныАҧсышәалаAbkhazХуссар ИрыстонИронауОssetianსაქართველოქართულიGeorgianAzərbaycanАzərbaycancaAzerbaijani
Middle East
Sputnik عربيArabicArabicTürkiyeTürkçeTurkishSputnik ایرانPersianPersianSputnik افغانستانDariDari
Central Asia
ҚазақстанҚазақ тіліKazakhКыргызстанКыргызчаKyrgyzOʻzbekistonЎзбекчаUzbekТоҷикистонТоҷикӣTajik
East & Southeast Asia
Việt NamTiếng ViệtVietnamese日本日本語Japanese俄罗斯卫星通讯社中文（简体）Chinese (simplified)俄罗斯卫星通讯社中文（繁体）Chinese (traditional)
South America
BrasilPortuguêsPortuguese
NewsfeedBreaking
06:00 GMTDanish IT Giant Under Investigation for Alleged Illegal Supplies to UAE Despite Export Ban
05:51 GMTTrudeau Says Canadians Sending Liberals Back to Work With Clear Mandate
05:38 GMTPrince Andrew’s Lawyer Reportedly Served With Sexual Assault Suit Papers
04:36 GMTCanadian Opposition Conservatives Leader Concedes Defeat in Election
04:26 GMTLive Updates: India Reports 26,115 New COVID-19 Cases
04:25 GMTCanada’s Liberals Lead in 157 Districts With 70% of Polls Reporting, Elections Commission Says
03:50 GMTGuterres Urges US, China to Rebuild Their Relationship to Avoid New Cold War - Report
03:42 GMTPhoto: Bolsonaro Forced to Eat Pizza on NYC Sidewalk Because He Is Not Vaccinated
03:31 GMTCanada's Liberals to Win Most Seats in 2021 Federal Election, Projections Claim
03:15 GMTUnited Russia Party Wins State Duma Elections With 49.82% of Votes
02:55 GMT911 Call Reveals Boyfriend Was Seen 'Slapping' Petito Two Weeks Before Her Disappearance - Report
02:31 GMTBiden Reaffirms Strong US-UN Partnership at Meeting With Guterres
02:22 GMTIndia Cuts Off Communications, Internet in Kashmir Due to Terrorists, Reports Say
02:12 GMTMember of CIA Chief’s Team Affected by ‘Havana Syndrome’ During Work Trip to India, Report Says
01:22 GMTClimate Change-Driven Cyclones Could be Regular Sights in Europe in 30-50 Years, Meteorologist Warns
01:02 GMT‘License to Murder Children?’ Psaki Panned for Bringing Up Biden’s Losses in Kabul Strike Answer
00:38 GMTMilley Told Admiral to Halt Operations in Pacific That China Could Deem 'Provocative', Authors Claim
00:11 GMTPremier League Goals of the Weekend
YesterdayMali Looks for ‘Plan B’ to ‘Bolster Our National Defense’ As French Mission Exits, Leaving Chaos
YesterdayGlobal Pandemic Caused Significant Surge in Demand For Black Bridal Dressers, Fashion Experts Say